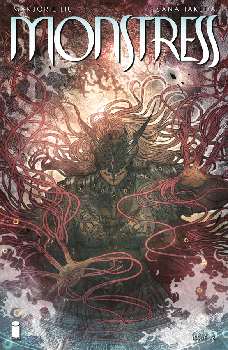 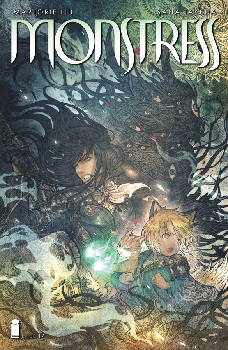 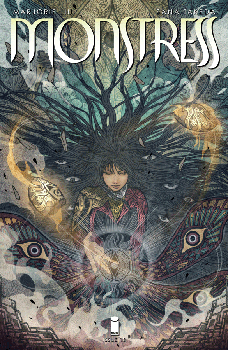 Looks like Pontus won’t be getting their shield anytime soon. Or at least at the rate we’re going, the attack boats will beat them.

This issue felt unsatisfying due to having many more plot threads than just Maika’s and Zinn’s exploration of the Shaman-Empress’ lab. Or perhaps, I always consider that by the end of the issue, Maika will likely still be okay and alive and so will Zinn. They are the scary powerful ones after all. This is also their story.

Zinn’s either hiding something, or he’s in complete denial. Though I imagine if you lived that long there might be a few things you’d forget.

The battle scenes weren’t my favorite either. But even when Monstress isn’t at its best, it’s still head-and-shoulders above most other books.

Does this flashback mean Tuya activated something inside Maika? I’d assumed it was her mother. It was nice to get confirmation that Tuya is a hawk/bird of prey. (Though I kind of wanted vampires in this ‘verse.)

I do want to know why the cats were persecuted and killed in the last war. Perhaps it was to force the universe to forget to allow the Monstrum to fully come back.

I believe this is the first — or one of the very few — issues I’ve rated as four stars, not five stars. I’ve been thinking about why this issue didn’t work as well as the other issues for me. (With books like this, they are often far above others book in quality, but that doesn’t mean they don’t have bumps.)

For me, it was the art here. The two Monstrum fighting against each other muddied everything. Usually, I adore how Takeda works in motion, and how she makes the violence just graphic enough. However, the movements and the color choices made me re-read this issue, because I had a hard time following the action. I couldn’t tell who was down, who was up, and who was winning.

I mean, clearly no one is winning if there’s now a hole punched in the universe leading back to where the Monstrum live. As the Doctor says, “Thing about cat flaps is, they don’t just let things in, they let things out as well.” We will see if this cat flap is a two-way street.

This is the first time I’ve wondered about — or seen a possible end — to Monstress. The mystery has always had many layers, and things will no doubt get worse before they (may) get better. But it’s now clear that Maika may be able to send Zinn back to their people.

I’m still not sold on the wash Takeda’s using in some of the action sequences around the Monstrum. It is very similar to how horror movies often hint at the destruction; except here, we’ve already seen the Monstrum and know the basics of what they look like.

Not only must the gang take down one Monstrum in the next arc, but they also must find Kippa! I assume “family” means actual family or some kind of mob Ren’s involved with. He seems like the type of character who would have shady ties everywhere. Though why they want Kippa specifically is a larger mystery.

Things which specifically stood out to me as threads for the next arc, or new mysteries in this book:

Maika now has a direct connection to the Shaman-Empress, which means she doesn’t have to solely rely on Zinn for information. Given his amount of misleading statements or things he’s “forgotten”, she might start solving more mask-related and mother-related mysteries.

The use of “mothers” will certainly come back. We still don’t know a ton about Maika’s own lineage beyond her mom, aunt, and that her father as Shaman-Empress descendant.

The Monstrum were in chains in their prison. They seemed to blame Zinn, and they seemed to be in pain. They also used the loaded term “masters”, which — at least at this point — seems to be related to the mask. This glimpse appears to contradict some of Zinn’s stories.

Gull will no doubt be back.