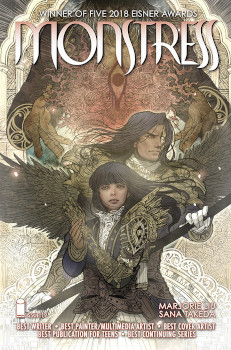 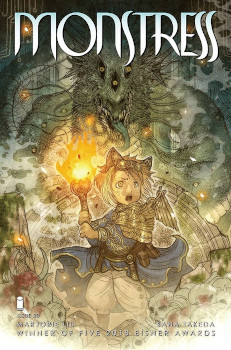 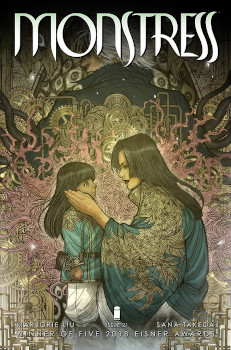 I cannot say I’m surprised that Kippa has some latent powers of her own. She’s survived so much in this book and inspired something in Maika to protect her. What her whoever are — besides kindness — we shall see. Especially as Kippa jumped into this pit. What a great cliffhanger!

Kippa’s mom is maybe the best parent we’ve seen yet. She’s so right about how the Ancients are all into their plans and themselves. I’m not sure — but I believe that Kippa’s parents one of the first couples we’ve seen where one was more animal-looking and the other more human-looking, but both Arcanics.

The Monstrum turning people mad and essentially into violent zombies is pretty scary. And not great for Pontus. Especially since the non-affected people seem to be losing, and not just because of the surprise factor. It seems like there may be some powers that could calm these people — either in Maika/Zinn or Kippa.

I’m pretty sad that the unicorn died. It is very interesting that Corvin was in Constantinople. And the little threads about Tuya.

This issue of Monstress felt biting. There’s certainly a new direction this story seems to be going, even as the focus on Maika/Zinn continues. But now we know much more about the Monstra than before, there is time to focus back on Kippa and Ren.

I’ve always suspected Vihn was more than meets the eye. Now we know she’s an Ancient, who is a goat; hence the horns — and Ren knew who she was the entire time. I do find it fascinating that Ren seemingly supressed his own memories, in order to not give away the knowledge the Blood Fox gained to whoever pulls his strings.

Tuya’s marriage to Maika’s aunt, the Warlord, was shocking. Especially since Tuya also slept with Maika. Was Warlord who Tuya was giving information to? Or perhaps, she was betraying the Warlord, or just happened to fall for Maika?

I’m a bit confused on the timeline in other places when we see the Wolf Mother trying to bring the two courts together.

Kippa’s would be captor looks like a fun character, and I hope both of them live. Though if those cave paintings are any indication, Kippa will more than save them, and then go forth to save everyone else in that cave. Maika won’t be coming for her anytime soon.

Yvette is the monster you cannot kill. Though Maika’s father!? I suppose she would have to have one.

While I don’t know which of these War-Masters we’ll get to know the most, Takeda’s designs continue to impress me. She’s so deft in creating different beings and mixing human and animal traits into them. This Blood Court remains so highly specifically designed and adds even more lushness to this world.

Of course, Maika’s dad runs the Blood Court and a private army. I guess they are trying to protect themselves in the upcoming/happening conflict between humans and Arcanics? It seems like they would’ve wanted to protect those sanctuary cities like Pontus.

The photo of Ren feeding baby Maika her bottle was too precious. Of course, Maika may trust her father less when Ren and Kippa don’t show up in a timely manner. (Corvin ran away again.)

I didn’t realize Tuya was only 19-years-old, but the timeline of her wedding to the Warlord now adds up better. It makes more sense that they weren’t married until now. I’d like to know how Tuya amassed that type of power, influence, and wisdom at 19.

Everyone loves the Shaman-Empress’ memories a little too much. With Zinn cut off from Maika, I assume this means he’ll have to deal with his nature on his own for a bit, and yeah, Maika was right to point out the problematic move of her dad just giving her an arm. He’s not letting the fact that he had more of Zinn’s power previously go. (Which the Doctor’s statement about that was frustrating and made it sound like he didn’t know Maika was born, even if he did and spent time with baby Maika. Maybe Zinn’s manifestation in her didn’t happen until Constantinople.)