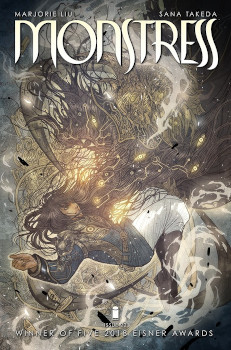 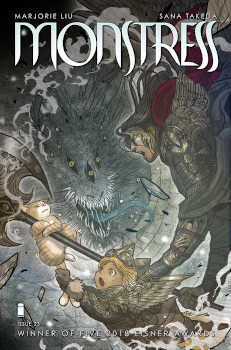 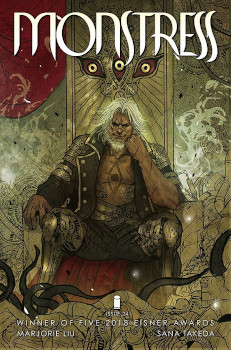 Now I’m trying to recall where that dog came from and where we’ve seen him before. But my brain isn’t working.

Maika didn’t quite find what she wanted. She’s still cut off from Zinn and not quite sure how the Doctor is doing it. Maika does have some clarity on her mother’s death, or at least from what’s left of Yvette’s mind.

I loved Lady Dracul, especially how Kippa could talk with her and knew the ancient tales enough not to be scared of her. Instead, we get stories of the stars though Dracul’s seemed to be more about portal technology than spaceships. Not quite sure what she meant by how all that would be destroyed when it seems like that technology was already pretty decimated.

Kippa talking to the monster on the boat and hopping out before her would-be captor was pretty great. Same with the bit of bonding they did. Because Kippa knows how to make friends with everyone, that is her superpower.

Maika’s correct about the War-Masters and how they should be more worried about the Monstra. And wow, hearing them talk about Tuya like that if only Maika knew.

The recording of the lost world that the Doctor played with beautiful. Societies are broken down, and knowledge is lost quicker than we all assume. Even the cats don’t seem to recall this time.

I’d thought the Doctor had artificial legs but wasn’t quite sure since we didn’t see a lot of full body drawings. I like how Maika sees her disability differently and not as a hindrance.

I loved the plants, of course. I know what kind of art I’d be requesting from Takeda if she took commissions and I had enough money. I could’ve had more of Vihn admiring the recreation of a past she lived.

Vihn revealed herself. This must mean that Maika should be able to tell anyone’s true form. Her father is wrong about a lot of things; however, he’s not wrong that she could learn much from him. If only Maika could learn secrets about herself.

The cannibalism reveal was horrifying. I guess you get the hunger no matter what. Yikes. How do you ever ethically navigate that? The Doctor is correct about how you can’t just go starvingly wild and then take no blame for your actions. No doubt when he did that, that’s how he got his nickname.

Yay for Ren saving Kippa. Both of them crying was breaking my heart.

Zinn was split in half? Or just his heart? Or maybe the Empress only had him enslaved?

For a moment, I thought that Maika/Zinn had eaten her father. He may have baited her, but he knew better than to stick around for the damage.

Still surprised that Maika saved the Inquisitrix, instead of killing her. Like I understand her not letting the Doctor further torture the Inquisitrix, but just letting her go? (And yes, now I remembered who the dog belonged to.)

Kippa and Ren show up together right where the Doctor was always trying to take them. (Of course, he probably would’ve tried to use Kippa as leverage.) Vihn’s suggestion of how to punish Ren for his betrayal was cold — or decisively not restorative justice. Though Maika is never one to really talk about her feelings.

Ren is freerer than he’s been in years, even if he owes Maika.

Since Zinn has talked about being split in two and the Doctor was talking over a radio with someone he called daughter, I take it that Maika has a twin sister. And this will be our next plot twist. Though I don’t know how I feel about a twin being added to the story so late.

Tuya and the Warlord are brutal and abusive to each other. I guess I also don’t understand why they would ever have sex. I cannot believe how much the Warlord doesn’t know about Maika.

How long do I have to wait in order to get more Monstress?