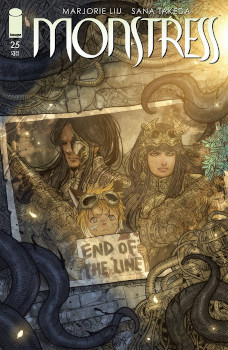 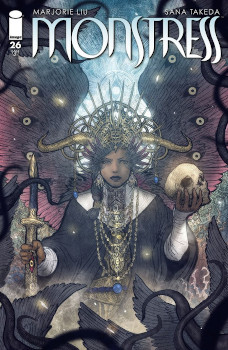 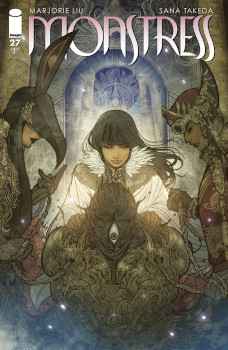 So Marium, we’ll be figuring out who or what she is next. I assume. Since the lady character, whose name I can’t remember because we haven’t seen her or her brother in a long time, said her name in prayer, I’m going to assume this mystery will be smaller. The Inquisitrixes know.

There was a ton of setup here, and while I ended up reading this issue twice — I took too long to review it the first time — I’m not sure I gathered any more clues from the text. It was more a catch-up on everyone post-hiatus. We already knew Maika would be continuing on her mission and that some of her chosen family would be breaking up. Especially as Kippa forms her powers and has promised to protect her people.

Kippa is right about Ren. I love how she keeps his tail for him.

I will miss both Vihn and Seizi. I desperately want to know more about Seizi and Maika’s mother’s marriage. Corvin remains boring, and we still don’t know how princess Tuya ended up with Maika and scavenging bones as children.

No one is surprised Zinn comes out when he’s hungry.

And we have forward momentum.

My bet about Marium is that she was the Shaman Empress’ righthand woman and the first Cumaean witch, or formed whatever they would become. She somehow got away from the Empress or helped with her downfall by using Zinn’s powers. It doesn’t seem that their obsession with the Mostrum is new, and if they aren’t Arcanics, then their powers have to come from somewhere. It’s especially pointed that they get more power from Arcanics’ essence, which what Zinn eats after all.

I still want to know what Tuya is up to.

Maika unleashing her inner warlord was some incredible writing and art by both Liu and Takeda. What she says to Corvin and what she then does and says to the people of Ravenna is stunning. Maika’s styling makes her look more like a general than ever before, and frankly, a little more like her father. We’ll see what chances they have against the incoming army.

Of course, there are secret cat tunnels into Ravenna. I adored how Kippa just bounced through them while Maika and Corvin had to crawl. I also don’t like tight spaces like that, but I suppose Kippa ahead of them would help prevent them from getting stuck. It was fun to see the inside of a cat temple.

Yay for more movement in this book.

There’s been a lot of war horror in this book, but this issue, it needed a warning for such grim horror, particularly body horror. Yikes, this is the stuff of nightmares. War is brutal and cruel, and Maika’s childhood taught her such things.

Though I do wonder where child Maika got that gun. Also, I know Maika’s young, but Takeda’s art here makes her look so much younger, and it makes me wonder how Tuya got her powerful position. Some of these timelines appear to no longer be matching up. Which I guess is what happens when you are telling an epic story over the years in a serialized comic book format.

Also, wtf, apparently Zinn and the Shaman-Empress could procreate? Maybe Marium? I mean, we do get a part about how the Arcanics and the Humans indeed fucked and had babies together, and confirmation that in this world, two women can get each other pregnant. I feel like there’s some biology special coming up.

Kippa got played by some witches with the ghost spirit of her friend. No fair. No one likes it when anything bad happens to Kippa and her gentle soul.

Maika really needs to learn how to not binge and then pass out for days.

The best exchange was between Corvin and Bettani. We found out so much about the two of them and who they are, and also why Corvin’s so obsessed with Maika. Corvin and Tuya are prophesied to kill Maika and Zinn together. (It also seems like these Oracles should’ve been mentioned before, and maybe they were, and I just forgot.) I want to see what Corvin saw. Certainly, the prophecy could’ve been about stopping other Monstrum.

In general, all the court and spy stuff generally bore me. I care not for it, except in the parts that actually move the plot along.