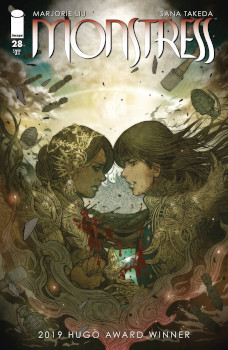 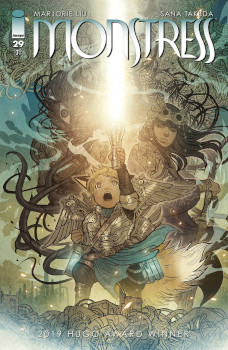 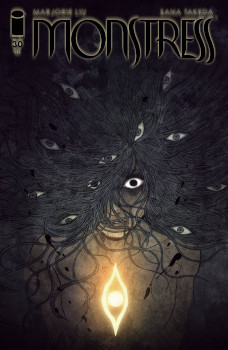 Kippa clearly has some ties to the older powers. Or at least, she’s being protected by Zinn. I do hope we’ll have more of her mystery unraveled. Not that I believed, at this point, that she’d die. Liu doesn’t seem to be one to kill off her main characters, at least they won’t stay dead for long.

In the flashback, does this mean that Zinn was not in Maika’s body until she called him or something else magical happened to her in the moments when she believed she might die. Tuya clearly knew about the prophecy at that point. Perhaps those near death or in mortal danger moments are when Zinn is pulled. We do know that Maika’s father tried to harness him for a long time, and the timeline on this is a little sketchy.

The reveal that those albino-looking witches are basically part demon are indeed interesting. I don’t know how the Cumaean witches thought they could mess around with these supernatural forces that they’ve called demonic and not expect the energy to change them. One small quibble I have with these books is that the Cumaean pretty much seem irredeemable. Yes, they’ve been “corrupted,” but those who aren’t, are still genocidal assholes.

I assume Kippa thought those kittens were still alive because she can see ghosts.

Corvin has some powers we haven’t seen. Which is odd because when Pontus was exploding, he seemed less powerful. The Warlord showing up will not be good for Maika. I love Takeda’s creativity and the sci-fi elements she’s put into the Warlord’s armor.

It was interesting to have an issue without the current timeline Maika. We only get her in flashbacks here.

Ren was just working for everyone. Good to finally confirm that cat’s alive.

Speaking of cats, wow, the ending cat tale was horrifying and wicked of Liu. Though I had wondered what the Humans who hate all other sentient creatures think about the cats. Now we know, they lobotomize them and cut off their tails to make them domestic cats.

We finally see what happened at Constantinople: Maika and Zinn merged together. If the sky is that color again, what does this mean? Also, Maika would’ve perserved Tuya somehow since she was at the epicenter. I assume what actually happened there was that Zinn ate everyone.

I’d been assuming these flashbacks were after Constantinople and before the start of the series, but they are not. This means there’s some missing time. How did Maika and Tuya get into that situation to start with?

War is terrible. Liu continues to balance the main mystery and the small stories with this overarching theme. Maika’s tactics were cruel and smart.

There is no way that the Warlord doesn’t know Maika is the woman the others speak of as being scary. If Tuya knows enough to go the other way, then the Warlord also know Maika’s position. Of course, they were depending on those airships…

Those flashbacks were only six years ago! Wait, what?! I know young teens grow into adults seemingly overnight, and they can look like children one day, and then, bam. However, I still find the art of Tuya and Maika at Constantinople jarring.

I think it’s about time to reread this series. The mythology has gotten another level deeper, and in the scenes with Maika and Colonel Anuwat, I struggled to recall Maika’s path as a character. I don’t recall her being trained as a solider, or when Anuwat was featured earlier. There’s a hazy memory, but perhaps it’s time for a reread.

Corvin has some decisions to make about his loyalty. And now that Maika’s escaped, it’s only a matter of time before the Warlord comes face-to-face with her niece and realizes who she is in all this.

Watching Tuya’s mission with the airships fail was harrowing. Especially as the cats were almost instantly killed. It doesn’t surprise me to hear that the Ancients also find it advantageous to have the lilium refinery still operational. Often, even the “good” rulers condone awful things because it’s politically popular, gives them a good enemy, or other complicated manners. (Obama was called the Deporter in Chief by immigration advocates for a reason, after all.)

Ren is always playing games. But I’m glad he’s back in the mix.

It doesn’t surprise me that the Doctor would have another daughter and a sister to Maika.

I’m not sure what we’re seeing in this vision, besides a clear indication that Zinn isn’t like a parasite in her body, but part of her DNA.

Maika’s words to Kippa were perfect. Kippa was right all along that Maika would never hurt her.