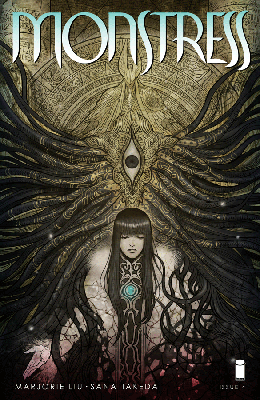 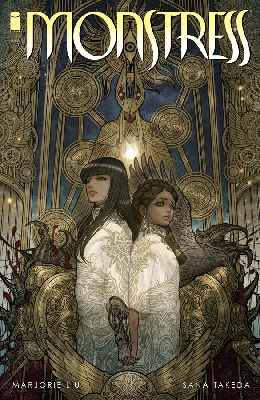 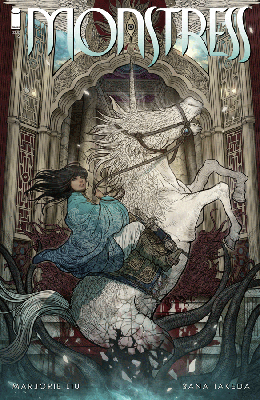 Love how quickly the monster has developed its own sentience and Maika can communicate with it already. It feels nice to not have her wonder around in confusion for too long. There’s still plenty of mystery left for Liu to unravel. There’s plenty of rules about the world that we don’t know yet.

Takeda’s art work continues to be one of my favorite parts of this book. Her Honored Queen of Wolves is amazing. (Is that Maika’s grandma?) I love the character design and how she differentiates the styles of different peoples. No detail is spared.

I take it that Alia is Maika’s sister. Or maybe her aunt. I assume though that she’s going to be all up in Maika’s business. Not to mention how telling it is that all children in this realm are treated badly by each side, if the children have something the adults want.

I won’t argue with adding in more cats to this series.

Maika is going to have to figure out how to feed the monster without it killing her friends. I wonder if it must eat living beings.

Kippa hugging Ren that tightly is like me when I haven’t seen my cat in a while. Yep, figures that I identify the most with the little fox kid and the cat.

Monstress remains one of the best titles out there. Seriously, the writing is incredibly layered and the art beyond stunning. The story’s an intricate weaving of words and art. It’s amazing to think that Liu and Takeda must speak through a translator, but their work together is so seamless.

The flashback of Maika and Tuya in the slave camps was just so sad. Liu masterfully wove it into the tale later when you were least expecting it, when Corvin calls Maika out on her posh childhood, and then Kippa reminds them that they were all oppressed slaves. It’s not about the oppression olympics, Maika and Corvin.

Speaking of Corvin D’Oro, I’m really interested to learn more about the Court of the Dusk vs Court of the Dawn. Do they function together? Do they have certain governmental tasks? Different territories? Do they compete against each other? Why are there two?

The Arcanics are super classist. It makes me very interested in learning more about Maika’s mother and how Corvin, an orphan, was elevated to his position in the court. Though I assume he was some high-caste Arcane’s bastard.

Seemed like both Corvin and the Monstrum were telling the truth about what Maika should do. Of course, they’re lead into a trap. (Oh, Ren, he totally betrayed them! But came to love Kippa!) And then the Cumaeans are going to run into that.

On another note, I can’t wait to get to know more about Atena, who’s apparently a double agent, and her brother Resak. Please tell me more about this underground resistance of Cumaeans who don’t want to kill the Arcanics anymore or be at war.

This issue made me gasp at least twice. Dang! So great.

The first gasp was at the reveal that Mother Superior is a creature like Monstrum, but hides behind her control and her face mask. I suppose it’s not surprising that the Old Gods would easy hide in and take over the Cumaeans. Seems like they’d be a great target for use of supernatural powers without seeming too suspicious.

The second gasp was the reveal that Tuya is part of the Court of the Dusk. It wasn’t just Ren betraying them. No doubt, Tuya was sent by the Court of the Dusk to keep an eye on Maika, especially since she’s of some kind of high caste. It was especially gasp-worthy from when Tuya was the one who started letting the air out of the sarcophagus to kill Maika. At least Ren had second thoughts and came back.

Though I feel like the entire Court of the Dusk knows Corvin let Maika get away and take his airship.

Tanno cracks me up. He definitely provided a nice humorous relief to all the shocking reveals, emotions, and death and battles.

Loved the reveal that Monstrum lived inside Maika’s relatives and she inherited the Old God. But if Tuya isn’t her biological sister than who can inherit Monstrum still? Alia?