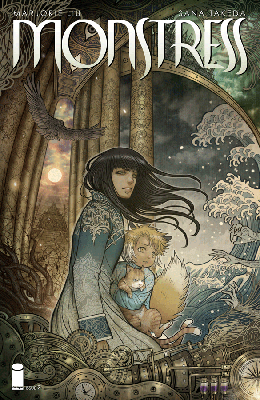 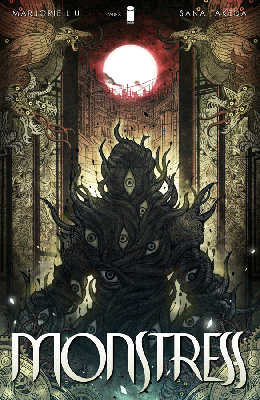 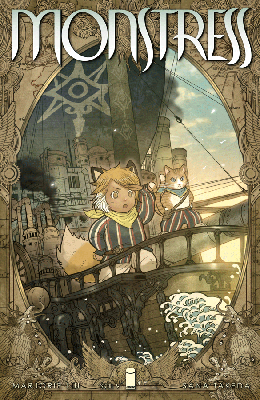 OMG this book. I love it so much as it’s just wrenching. Every single bit of it is wrenching.

One wonders how much of her physical body Maika will lose over the course of this series. Likely to match the parts of her soul she’s selling or destroying. The scene with self-harm to what’s left of her arm was powerful.

I do appreciate the other characters calling Maika out on how she was born to privilege. Even if her mother’s adventures had them living in the dirt. And certainly, she’s had a rough life since her mother’s death and the war.

I called the Sword of the East being Maika’s aunt.

Interesting to learn that nekomancers can bring back the dead. And not just dead cats. Not surprising to find that Maika was the weapon that ended the war. However, it seems to be a third power, not something specific to Maika or Monstrum on their own. This scenes answers so many questions from the first volume.

Oh, Kippa seeing herself in the beggars on the street. She knows how close she’s come to being like them, starving and homeless. Or very dead.

Ren surviving with all his tails shocked me. Though my favorite scene with him was when he visited the other cats in their temple and cat hiss fought with Jadala Bonetail. I really just want an entire spinoff about the cats.

Seizi and Kenzi being tigers who distrust cats is super interesting. Also, with this world being so female-focused (on purpose by Lui’s choices), Seizi tilts the story a bit in tone. He’s essentially Maika’s fatherly standin. Though it looks like he won’t be going on the trip with her (though maybe joining them later). Also shows Maika’s continued reluctance to bring anyone else into her world.

Old Tooth is the best. I love how we see Kippa swimming (poorly) in the sea, and we think she’s about to get attacked by a shark. But nope! It’s Old Tooth. I’m loving how imaginative both Liu and Takeda are getting with these sea Arcanics.

It’s interesting to see Maika’s choices when it comes with what to do with Monstrum when it gets hungry. She let it consume her arm (but also to save them) and threw herself now into the sea. Only to have Monstrum find a siren. (Which pondering why a siren would be near the boat makes me wonder about the Isle of Bones or if it was an undercover crew member.)

Monkeys are always evil. And I do wonder how those sailors keep their monsters under control. Or at least from eating whenever and whomever.

Of course, not for one second does anyone believe Maika is fully dead.

Maika is alive, and she’s more determined not to hurt anyone else. Except Ren who owes her and Kippa who refuses to leave her side. Kippa may have learned to swim, but she wouldn’t have survived those waters.

Called the Arcanic full wolf leader Queen of Wolves being Maika’s grandmother. I love how this book shows the problems with family and the problems with royals. Also if Tuya is a last baroness of the dusk court, does that mean she’s even more powerful than we ever thought?

Moriko being a bad mother revelation is unsurprising. Unless she knew fully about Monstrum. Unless she knew of Maika’s role in the ending the war. Of course, we don’t know for sure the timelines of when the war happened and how old Maika was. I also suspect that Moriko passed Monstrum to Maika, which means it could’ve been the outcome of whatever happened in Constantinople was Moriko’s doing.

I really like the mermaid ruler lady and her girlfriend. Both their character designs are fabulous. The translucent style coloring on the mermaid lady by Takeda is gorgeous and technically a feat. I wasn’t sure how I felt about the story going toward a betrayal from Seizi, but these ladies can keep talking. Though I have lots of questions about how the logistics of their relationship works.

Monstress could basically be renamed: The Book of Lots of Questions.