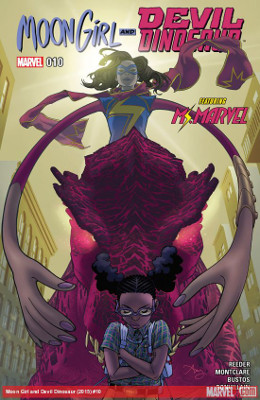 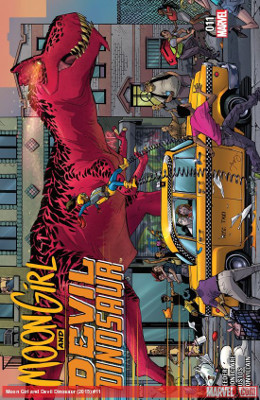 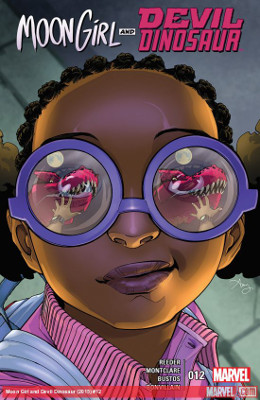 I wanted to give this issue four stars, and then I realized that Mel-Varr’s mom never got a name. His dad is Pad-Varr, who just addresses her as “wife.” I get that he’s supposed to have a toxic masculinity streak and that’s why Mel-Varr’s having misplaced emotions and trying to be a hero, but geez.

I love how it’s Kamala who trips over Lunella’s superpower not being her big brain. In fact, she never does tell Kamala exactly what her powers are. Though you’d think Kamala would at least pick up on one of them with how Devil Dinosaur obeys Lunella. Though they are friends, like Squirrel Girl and Tippy-Toe, not mind controlled like Ant-Man and ants.

Kamala was also refreshing in this book because she acted like the adult. Finally, Mel-Varr and Lunella had an adult figure who actually did care about them. I loved how she just scolded them in her embiggened form. It worked perfectly. Bustos’ art rocked here.

I do hope that this is one of the very last times we have the brain switch shenanigans. Clearly, Mel-Varr can help her figure this out. Though I am a little disappointed that Lunella didn’t figure out Marvin/Mel-Varr before his reveal in the lab.

Of course, Ms. Marvel takes Lunella to the hospital when she’s acting strange. And then her parents put her under lock and key. Lunella’s correct that eventually everyone will forget and let her go back to school.

If I were Lunella’s parents, I’d be checking in on her like every single second to see if she didn’t sneak out again.

The parents have been problems here. But of course, it fits the tropes of “parents just don’t understand” which works so well in YA books given their audience feels the same way about their parents (no matter what quality of parents or guardians they have).

Lunella never should’ve told Devil Dinosaur that she never wants to see him again. Especially since you know she’s immediately going to want him again to take down Mel-Varr.

This book has actually gotten substantially better in the last couple issues. In fact, #12 was perhaps the most charming issue to date. It kind of makes me sad that I decided to cancel this book when I was so far behind on it.

I guess there’s always trades. (And I heard this title got canceled, so there’s probably only one more trade.)

Anyway, I both loved seeing Lunella’s growth here and the growth of the universe around her.

Mel-Varr’s confession of love was just absurd enough to make him likeable. And also make the terrible decision to send Devil Dinosaur away just a moment of child impulsiveness. Mel-Varr is a rather bad warrior for falling in love with his target and giving up his secret identity. Though if you are going to tell me that Lunella is the smartest person in the MCU, then she should’ve put two-and-two together about Mel-Varr.

The Lego dinosaur was pretty great. Also that the erratic actions of Devil Dinosaur as Lunella were programmed to work in it. I loved the part about how easily it falls apart. Not a great thing for long-term fighting.

Amadeus declaring Lunella to the be the smartest person in the MCU was pretty great. And an amazing send off for the next part.