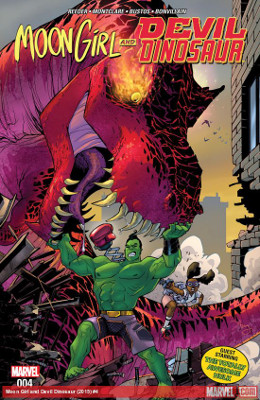 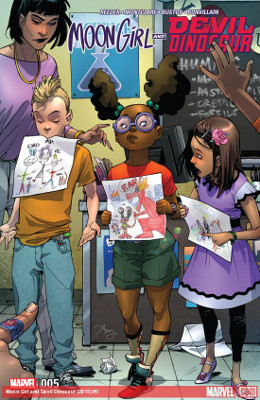 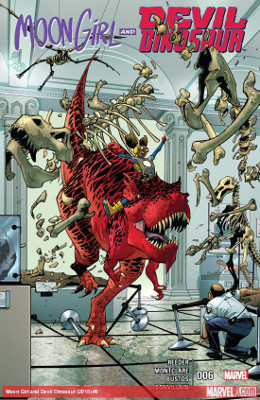 Wow, this issue did not do it for me. Patronizing Amadeus Cho Hulk was not my thing. (He reminded me too much of the adult characters in Rocket Girl, which made me miss that book instead of wanting to get into this universe.) I get that the setup was showing both how stubborn Lunella and Amadeus are.

Lunella’s in a load of trouble with her parents. It would be nice to see an adult or two supporting her and her dreams. Interesting that she’s terrified of what Terrigen mist might do to her.

This whole Killer Folk verses the Yancy Street Gang fight just left me cold. First of all, this is the only universe where gangsters in the United States don’t have guns. The Killer Folk may be more skilled in fighting hand-to-hand, but they sure as hell couldn’t stand up to a gun. Also just bad stereotyping all around. Why is this necessary?

I just want to read a book about a smart young girl and her pet dinosaur and their adventures together. Why is that so hard?

I continue to be shocked that Lunella’s parents don’t encourage brains. We see them pushing school, which is they were anti-education, they’d be fully anti-education. Not anti-Lunella’s self-education or interest in special camps. They’d encourage it. Of course, anti-education parents are a horror, one which I’m personally too familiar with.

I really want to know more about Lunella’s fear of becoming an Inhuman and how she thinks the omni-wave projector will help stop any transformation. Was there testing in NYC? Does Lunella have relatives with powers? Wouldn’t her parents also have Inhuman genes?

These are the questions that I want answers to. Once again, I’m disappointed about the focus on the Killer Folk. I really hope they are gone by the end of issue 6.

I did love the very last pages with Lunella declaring them to be Moon Girl and Devil Dinosaur. And for real, who thought they could lock a dinosaur up in a cage?

OMFG, this issue was good. Like 1,000 times better than the last several installments of this book. That scene where Lunella climbs on top of Devil Dinosaur and shouts, “The hunters are gonna be the hunted! Hahahahaha!” and they go after the Killer Folk = all I ever wanted from this comic since issue #1.

Lunella’s mother went a long way to redeem herself in this issue. It was wonderful to see her still not understanding Lunella, but being fiercely protective of her daughter. Montclare and Reeder finally got to the balance. Of course, she’d try to defend Lunella against the Killer Folk and be worried about her walking alone to school.

The bit about Lunella’s mom (who needs a name) finding out that Devil Dinosaur was free and knowing it was Lunella’s handywork via the newspaper was brilliant.

I also loved the scene where Lunella is by herself with the Kree device and the terrigen mist surrounds her. Her terror leapt off the page. Of course, when she goes into egg form, Devil Dinosaur picks her up and takes her safely to her secret lair. He’ll guard her until she’s ready to come out in her new form. (And he was actually there for her all along.)

Bustos’ art was incredible all around in this issue. Tamra Bonvillain’s color also made a magical splash and helped bring to life Lunella’s world.