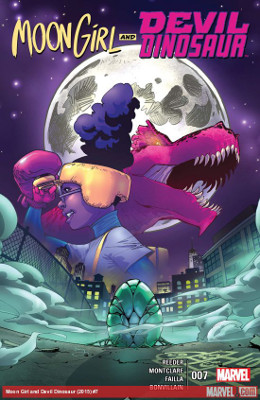 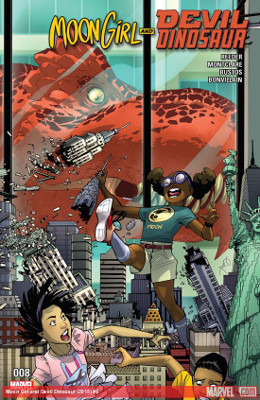 I’m not surprised that Lunella came out of the Inhuman egg/cocoon looking much like she did when she went in. I hope that was a conscious decision from Montclare and Reeder due to the fact that compared to our other superheroes, she already does look different because of Marvel’s lack of representation of people of color, much less young girls of color, in their universe.

Since being Inhuman is a genetic thing, I’m still wondering why Lunella’s parents don’t know anything. Or how they might not have guessed that she’d possibly been changed by the mists. This book’s real downfall is how her parents are treated. There’s very little redemption for this.

They also seemed oddly not so angry about Lunella being gone. Sure, their first emotion is happiness and relief. But after that…

I am looking forward to what I’m sure will turn into the Lunella having adventures with Mel-Varr. Or at least, together they will likely get in such a pickle that they must work together. A pickle bigger than their science Lego project.

And now we have a mind flip.

I very much love Bustos’ art. It’s so great and works wonderfully in a book about a little girl. It makes the world of NYC and the MCU a fun space.

The plot is a little meh. Like, okay, wacky things happen when Lunella and Devil Dinosaur switch minds and the little Mel-Varr doesn’t know what to make of it. I mean, it’s not out of the ordinary for a fourth grader to act all bonkers. Lunella’s a little old for that kind of outburst behavior. But not too old. Though I don’t believe the school wouldn’t have called her parents. Especially given statistically black children are sent to detention for minor infractions and at higher rates than white children for the same acts.

The whole scene where Devil-in-Lunella’s head grabs the hot dog is just too funny. And too cute.

Somehow I think Mel-Varr and Lunella are going to be fast friends. Or at least Ms. Marvel will make them work together. While Lunella herself is headstrong and independent, Mel-Varr seems more so. Especially since he’s on his own in NYC. Or at least we don’t see any Kree guardians watching over him. Would be an interesting contrast to see Kree culture compared to human culture.

If I was one of those teachers, I’d be at my wits end with those two as well. I’d be pairing them together to drive each other a bit nuts. Though seriously, is this an ad for Legos?

Bustos’ art and Tamra Bonvillain’s colors work together brilliantly in this issue. Lunella and Devil Dinosaur pop off the page. I’m a big fan of bright colors, especially in a story about youth.