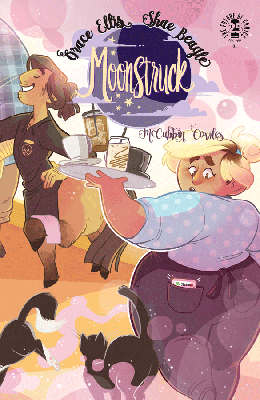 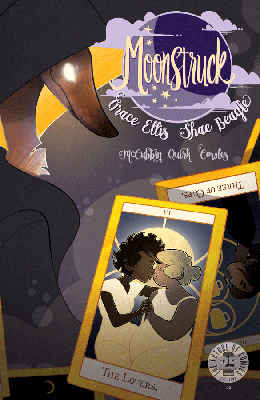 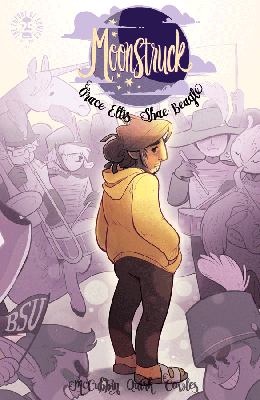 Before we get to the reviews, I had to share this adorable Moonstruck trailer video from Ellis and Beagle:

Moonstruck has lots of adorable elements that I can get behind. I do have to admit that apparently I didn’t look very long at the front cover before opening to read because I was totally surprised at the fantasy creatures aspect. I didn’t expect Chet’s lower horse body.

Of course, the first page is written and designed so you don’t notice until the very last panel.

Julie, our main gal, is a werewolf. And she’d rather be entirely in her human form, and she clearly doesn’t like to tell people that she’s a werewolf. I’m definitely curious to see how this develops and what rules develop around this fantastical universe.

In general, Julie is sweet. I adore her already, from her nervous fluffy feelings for Selena and careful text messages back to her to wanting to be a ghost writer for Pleasant Mountain Sisters. It does seem like she hasn’t told Selena about being wolf. Maybe? It also makes me wonder what kind of mythological creature Selena is.

Chet is over-the-top, and his crush on Manuel is cute, if really wasteful. He should just ask him out.

I already think Cass is my favorite so far though. I need to see more of her visions and her sometimes freaky powers.

This book is too cute!

Issue #2 was better than Issue #1 because we’re getting into the plot more than just introducing the characters and setting up some romance. Not that I don’t love the adorability of seeing Julie sweat over her feelings about Selena. Oh, young love.

I’m curious to see where Ellis takes Chet. The disappearance of his lower horse body into human legs could be used as a proxy for many things. Besides him being an unexpecting victim. I’m also curious how this will set the tone for the book.

The magic show itself was sketchy. I couldn’t tell if we were supposed to be legitimately concerned for the safety of our characters, or if it’s more of a tongue and cheek. The first issue seems to hint at the latter, but this one upped the seriousness. We’re still learning about this world, and I’m curious to see where Ellis takes it and about how much she has planned.

The art remains the cutest ever. The ghost was pretty fun, and all the characters’ big, exaggerated expressions are so much fun.

Chet being so upset that he lost his butt — also describing it that way — was too freaking funny. We feel for him, but laugh at his melodrama too. And it’s clear Julie is the less great barista of the two. (If issue #1 didn’t already give you this information.)

Newpals also cracked me up. Same with Chet’s apron hanging carefully in his bedroom when everything else was in disarray. Nice details from Beagle.

Cass remains my favorite. She’s the exact type of person who scoops everyone up her whirlwind and then blames it on her powers to see the future.

I died laughing at the gay pride Babadook in the college’s parade. This book is just the best.

Of course, Ellis shows up. How could a magician, especially one set on stealing magical properties (or so it seems), miss a parade? In the ensuing chaos, Julie and Selena both turn into their werewolf form. Julie, who clearly is ashamed about her shape, hides in Selena’s arms, and it’s a nice moment for the two of them.

It is Chet rushing out of his apartment — which had a great parade view — who saves the day. (After he got some courage from Babs, Dolly, and Godzilla. We contain multitudes, friends.) Chet kicking Ellis in the head(?) and saying, “That’s for stealing my butt!” is perhaps the best moment this book’s had so far.