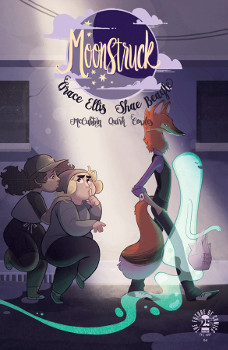 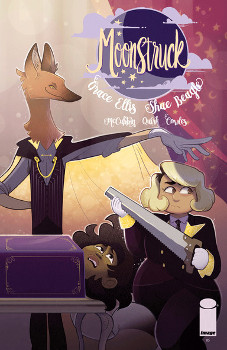 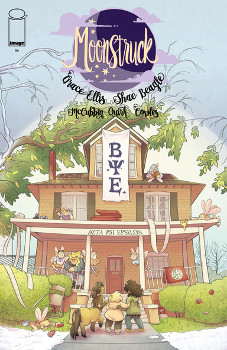 I still very much love this book. It’s so cute and extra sweet. It tugs on my heart. But I do always want more from it, and not just more in the next issue, but the issue seems light in pages.

Part of this light feeling came from the pacing. Most of this issue focused on Cass’ visions, which were of the impending relationship troubles between Julie and Selena. Sure, the issue was told from Cass’ point-of-view, but there were too many details and too much about her day job. I didn’t really understand the point of the costumes beyond it being a fun thing.

I now want to know more about the magician and the whole point of what they are doing.

Plus, Julie and Selena need some resolution. I’m going to say that those books are out-of-print. Or it was an older copy? That could certainly be a relationship ender.

The art in this issue seemed rushed. There was less design in the backgrounds, but the characters remained top-notch.

I feel as though I missed something between Julie and Selena. Did I skip a page of the last issue or something? Don’t get me wrong, I still think this book is the best, but the transition to this felt clunky to me. Particularly concerning their relationship.

We’re all glad Chet got their butt back. But also, that was confusing as well.

Was our villain trying to turn the entire world human? What happened to the magic when it was taken away? I’d assumed it was to accumulate magic in order to take over? It felt like the motivation was power, but then the ending kind of flopped.

Besides our girls getting back together. And I guess we started to see more of the meta point of Pleasant Mountain Sisters.

Not everything seemed to be where it needed to be this issue.

I believe this series will be a good example of a book that works better in trade format. I just worry that Image will shortchange the trades with too few issues. Four issues is not enough in a book for an ongoing!

It also seems weird that this last issue is collected in the next trade, and none of the rest of the issues will be printed as singles.

Chet and Manuel and Julia and Selena are too cute. Just gross cute. CT is right. In fact, CT is slowly becoming my favorite character. Or perhaps the character I most identify with. That may be me getting everything done at my work. EVERYTHING NEEDS TO BE DONE NOW.

Everyone should know not to eat and drink at a fairy party. That’s how you get stuck and never leave fairyland. Does no one read myths anymore? I was worried that the X on their hands only meant alcoholic drinks, but nope, everything.

That said, it would be pretty nice to be able to generate your own heat during the winter and not have to worry about the snow, the cold, the power bill, or climate change.