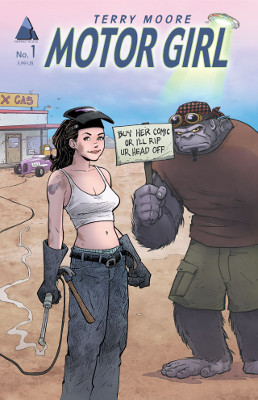 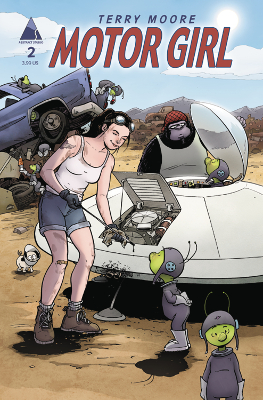 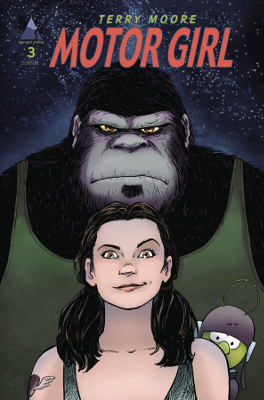 I’m not exactly sure what to think of this book. I’m terrified of monkeys and apes, so I almost didn’t pick up this title due to Mike. I also kept wondering if Mike was going to be a “real” ape, which he is not. Well, he’s real to Sam, but not to anyone else.

Moore did a great job in issue #1 of setting the stage. We know our key players. There’s some things at stake, including Sam’s health. We have enough background to get us running. This is, for sure, one of his more solid openers.

I’m cautiously optimistic about having a lead with PTSD problems who sees things. Though the aliens may have been real. I do appreciate the unpredictability of an unreliable narrator.

Though certainly around Libby, Sam never addressed the monkey in the room.

The aliens were another figment of Sam’s imagination. Maybe. It does seem odd that the corporation really, really wants Libby’s property and isn’t going to take no for an answer. I suppose Libby could also be seeing something too in a way that we don’t recognize.

While I do think Moore breaks down his comics to simplify the story to its essence and doesn’t waste words or space, this does seem light on content. Light on movement.

Except Sam pissing off those guys in a suits.

This issue definitely made up for the lackluster lightweight of #2.

I’m glad Moore included in the back the part with Libby in SiP. I’d almost forgotten about her, so always glad for the reminder. I figured this world would be tied into his greater comics universe since all his books are.

So the UFOs may actually be real? Or at least that’s what this rich guy is hoping to catch. The device looks like something out of Doctor Who. Why the heck would that guy try to lick it after getting told not to?

I do hope that Sam takes Dr. Kim’s advice to get further brain scans. Though you’d think the trauma would’ve shown up on the no doubt numerous tests she got after her capture. I guess there are many things we still don’t understand about long-term brain damage due to injury. I thought Moore did a wonderful job at balancing the severity of Sam’s story and Dr. Kim’s compassion. I loved the part about Mike, even if he’s probably part of the damage.

Enjoyed seeing Sam take out her would-be kidnappers. She’s also got them made. Not that she really knows what to do with that information.

Though Sam really won’t be able to do much in her current state.