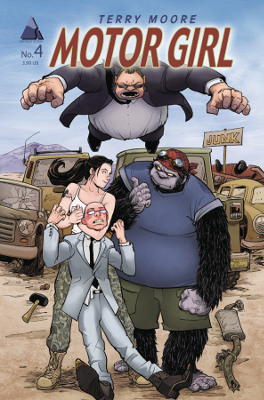 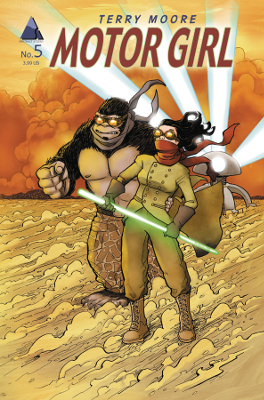 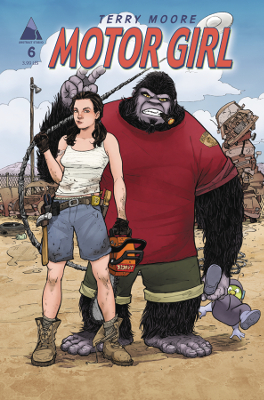 Why does anyone try to fight Sam? Victor should definitely know better by now. She already took out both him and Larry and got away from them. Seems rather pointless. Also, you’d think Victor would observe her talking to herself and back away.

Despite the tough nature of Sam, she is incredibly vulnerable due to her illness or whatever is going on with her headaches. Moore makes you feel okay that she sees Mike as he brings her comfort. Even if he may indeed be a sign of the illness or severe brain damage. And, we have to learn if Sam has anyone but Libby.

Though Sam may not be wrong about those aliens if they have Larry.

Is Libby gay or senile? One can never tell. The pam on her shoes was hilarious. I probably also found this scene more hilarious than it actually was because my parents just moved to Arizona, and I’m waiting for them to melt. Maybe I’ll ask my mom if she sprayed her shoes with pam. (You’d think that would be slippery.)

This book though feels like the plot threads went missing. The aliens are real, but also in Sam’s head. The aliens are friendly, but they are also performing experiments like they are cartoonish. Perhaps that’s it, perhaps the cartoonish nature of the aliens, and the discovery that they are real, is what doesn’t fit the tone of Moore’s world.

That doesn’t even fit the tone of this book. We otherwise have serious problems with Sam’s health and Walden’s takeover.

This was perhaps the most effective storytelling Moore’s done in this book yet. It ties our pieces together of how Sam became the woman we know today with the PTSD, head injury, and imaginary ape named Mike.

Moore always takes a light, but effective touch with trauma and tragedy. It’s what makes him great at telling women’s stories. It doesn’t paint the trauma with a broad brush. It may lead to Sam’s reactions, but it isn’t her reason for being or the sole point of personality. She’s more than this, but also stuck by it.

Sam always wants to help out the little guy, which explains her every reaction in Motor Girl.

Even if the aliens still remain to be understood. Or really what direction Moore’s taking the plot.