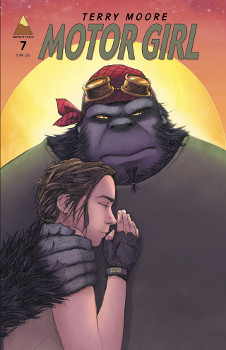 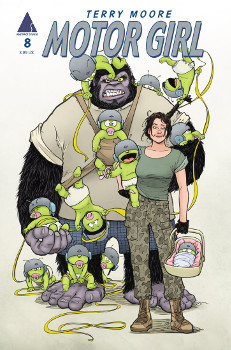 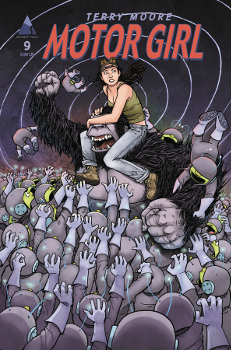 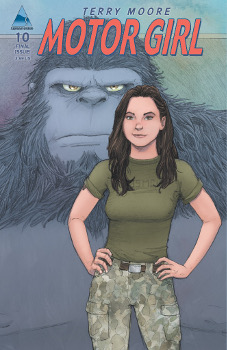 Our most coherent issue to date, and with the last one, the most impactful to us. We knew something was wrong with Sam’s brain, but the way Libby ended up back in her chair says it’s fatal. Says that Sam’s living on borrowed time. Also, knowing Sam, she may fully know that already.

Will Moore have them hurt Libby when she charges into those tents to see what’s what? I’m not sure. She may be in danger though when going full mother hen.

The scene with Larry and Vic and the alien in the bathtub was, however, comedic brilliance. I assume the aliens actually look like what we see there instead of the Toy Story cuddle ones that Sam sees.

I still don’t know where we are headed or what the purpose is. Moore’s last two books were so purposeful.

This issue was right down the middle for me in quality.

I’m not into the alien plot. Bik seems like he should be able to take better care of himself. Or themselves? Not exactly sure what pronoun to use for the alien. I did find it funny when Bik disguised himself as an older woman, who they just assumed was one of Libby’s friends.

Of course, Larry and Vic now have second thoughts about what they did and helping Moore with his capture an alien plan.

Which is good since Sam seems pretty much down for the count. I was expecting her to have a tumor, not shrapnel. Even though the shrapnel makes sense, it just seemed with Sam’s resolve toward seeing Mike and not risking surgery that it was going to be low return.

I did not see Sam’s transport being blow up, and her surviving a second explosion doing her tour of duty. That was shocking and harrowing. Plus, Mike (the stuffie) survived. Though I can’t help but wonder if he had a tracker inside him.

In this penultimate issue, there’s a lot to wrap up.

My favorite part of this issue is when Libby and Sam are at the bar. Libby’s such a great friend for her. She truly cares, and she doesn’t judge Sam, except that she wants Sam to get the right treatment to live.

The conversation Sam has with Mike about how she’s the strongest person in the room killed me. I have that same stubbornness, so I feel called out.

The debate about what’s real and what’s not real is high in this book. Do others see Mike? How do others see the aliens? Are there actual aliens?

Well, this was a big cheat. It was all dream. Or it was Sam’s dream about aliens while she was in a coma and then having brain surgery. This is a trope that’s been overdone for sure. I’d rather have a different explanation.

The aliens were definitely a deus ex machina when it came to dealing with the shady developers. Retrospectively, it was sweet how much Sam cared about Libby that she’d go lengths to protect her.

I did adore about Mike says that the little boy Sam didn’t save wanted her to have Mike so Mike could save her.

The very end did feel right. With Sam driving away, Mike (stuffed version) in the seat next to her, and heading onto the next step in her life.