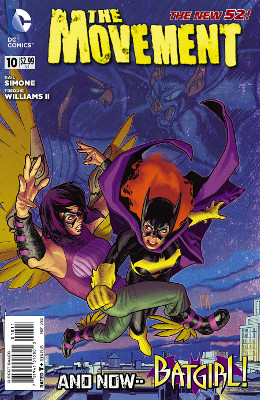 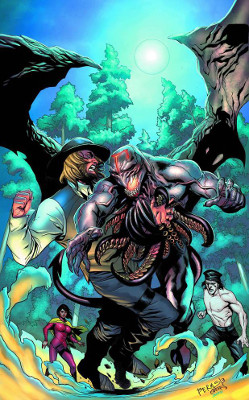 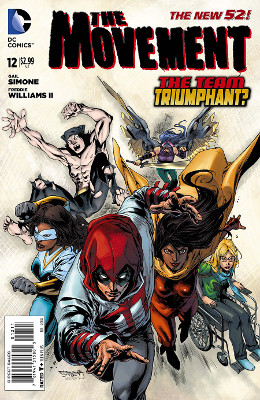 Wow, I feel like Williams seriously upped his game here. The art in this book is better than it ever has been, and it makes me sad that as he’s hitting his stride, there’s only two more issues left.

I did not see Katharsis hooking up with Horizon. Not that I found it unbelievable, just unexpected. I liked the little dream that they had about running away together, and then her finding out that she does indeed have bad judgement. I did enjoy that his character wasn’t as black and white evil as previously thought.

Very smart to have Babs freak out and get a flashback as she took out everyone when they tried to decowl her. She’s kind of lucky that Virtue can read emotions. Though I’m not buying everyone in Gotham’s pledge not to take off each other’s masks. Even if it does explain some things.

I liked that Tremor explained that she was asexual to Mouse. Even if he didn’t get it. And Burden’s inappropriate timing of his sexual feelings was perfect. I love how calm Drew was about everything.

I almost wish the Cannons hadn’t been introduced into this book as this was a nice issue that wasn’t about the main plot and now all those other plot threads have to be tied up in two issues.

While it’s odd every time Simone takes the story out of Coral City, this issue was incredibly powerful. I loved the reveal that both Burden and Jacob, his brother, are shapeshifters who took the forms that they were told they were as children. If Jacob hadn’t been so terrible to Burden, he too might’ve taken the form of an angel. I think it’s an interesting twist on the shapes shapeshifters give themselves.

I thought it was less interesting that Jacob was evil and Burden was good. Perhaps because we’re far enough along in this book that we, the readers, trust Burden to do the right thing.

The story of Burden’s abuse was pretty horrific. I did appreciate the twist that it was his brother — even if that was so very biblical. I loved that Burden was able to get control of himself when shifted and stand up to the town.

I was worried that Katharsis wasn’t going to be able to punch Jacob back for the damage he did to her. I was pretty surprised that he was able to get so many hits in. But it made more sense when you realized Jacob had similar powers to Burden.

Now how is Simone going to wrap up this world in only one more issue? This one felt like she was planning on having many more in the pipeline.

And now I am sad.

I loved the story about who Holly was. The twist that her mother faked her death worked so well, especially as Holly rising from the dead would’ve seemed far too obvious. And the continued knife that her father, while he recovered from the injuries an upset, young Holly gave him, he never recovered from the “blessing” of her “death.”

Of course, I completely loved Holly saying that the Justice League needed to change to incorporate heroes like the Movement. That they still needed to be who they were and that they were a different, new type of hero.

Captain Meers and Holly’s coming together in a type of father-daughter relationship was a nice contrast to the Cannons. I’m glad that the serial killer plot was wrapped up, and it wasn’t the Movement who killed him. Also happy that both Mouse and Burden survived the attack.

I’m really going to miss a title as diverse as The Movement and as reflective of the world we actually live in. Buy The Movement Vol. 2