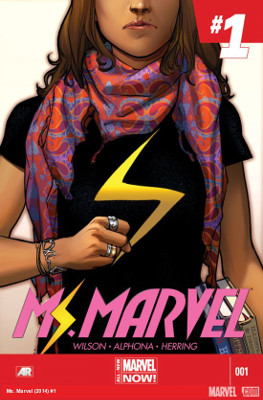 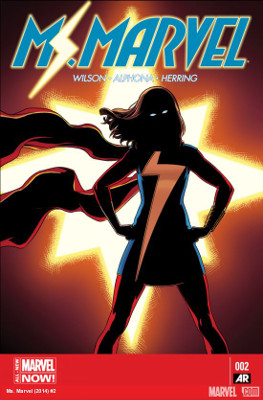 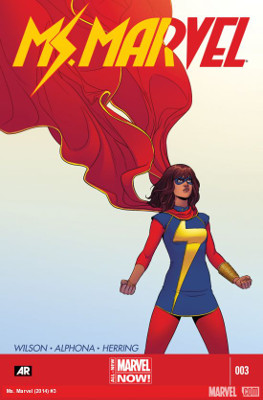 Basically, I read this comic book and I was like “Fuck yes! This is amazing! I want all comic books to be this amazing! Why am I reading all that other shit?” I’ve read quite a few books by Wilson (Air, Cairo, Mystic, and her memoir Butterfly Mosque), and next to her memoir, this is definitely her best writing yet. And I’d missed Alphona’s art so much! I adored his work on Runaways, and I love seeing how he’s grown as an artist since then.

I loved the tension between Kamala, her family, the “popular” kids, and her own desires for herself. It’s very teenager, but also quickly establishes Kamala as a well-rounded character with desires and opinions of her own. And agency!

The dialog, particularly when Kamala talks with other teenagers, felt very now. And in those initial scenes with her, Nakia, Bruno, Zoe, and Josh, I was worried that it might overpower the book. Or age the book really badly quickly. However, it stood in stark contrast against her family and how they see the world and worked well. I think making Kamala an Avengers fangirl and having her write fanfic is a pretty meta move and a good audience identifier. Kamala definitely has the Peter Parker-style story, just updated for the modern audience.

Obviously, Wilson’s always be very careful to present readers with different viewpoints on Islam and what it means to be Muslim. For those that don’t know, Wilson’s a Muslim herself. But I do love seeing a book that presents everyone as human, even Zoe. 😉

I love that we see Kamala sneaking out and going to the party, even though Jusuf (her father) has forbid it; and she already knows there’s going to be alcohol and other underage shenanigans, which she doesn’t seem to approve of either. I identified with this a lot as while my family was a different religion, that was me all through high school. My parents didn’t want me to go party; I wasn’t interested in what was happening at the party (which they didn’t really notice on any level); and the very few times I did party, I didn’t enjoy myself.

Of course, I would’ve liked to awaken with activated superhero powers. (I wonder what’s going to happen to the rest of the teens? Or if this was some kind of mutant activating fog?) But I kind of adored Kamala’s dream and her waking up as Ms. Marvel (with the old bathing suit costume). I also like that she doesn’t need to have the exact same powers as Carol.

I’m really loving the pacing of this book. It makes sense that Kamala would be freaked out by her new powers. (Though the “inhuman” throwout was a little over-the-top, and I’m not even reading the major crossover event.) The oversized hand added some lovely comedy to the situation.

Same with Kamala feeling far underdressed in the old-style Ms. Marvel costume. Her sneaking home, wearing a homeless person’s jacket to cover it, while still looking like Ms. Marvel, was pretty entertaining.

I love seeing Jamir as her big brother here. It gives him more character beyond the holier-than-thou routine we saw in issue #1. And I love the contrast in the two siblings compared to what their parents want them to be.

I also thought it was smart of Wilson to have Kamala’s first rescue be Zoe drowning. It’s a small act and someone she knows, even if she’s not a Zoe fan. It was also good to know that not everyone got special powers.

This book is just fabulous. I loved Kamala getting excited about youth group because it gets her out of the house when she’s been grounded all week. I also loved both her and Nakia sneaking out and all the jokes about the women’s partition in this particular mosque.

Nakia and Kamala’s fight was perfect. It was so teenage in how they wanted to share with each other. How Kamala tried to tell her, but it just didn’t work out because Nakia wasn’t the right person and Kamala still wasn’t talking to Bruno.

It’s a little unbelievable that Kamala wouldn’t get more than detention for destroying that much school property. She would’ve had to pay it back, and her parents probably would’ve made her work for that money. However, it’s also unlikely that the school could prove she did that much damage anyway. Though perhaps in comic books, property damage is just a drop in the bucket.

Wow, I was not expecting Kamala to get shot with the gun. I imagine that the emotions of getting shot will cause her to change back from Ms. Marvel to Kamala. I like that she wore the updated Captain Marvel costume.

I like getting to know more about Bruno. About his family and about how smart he is. It’s good to see that it’s not just Reed Richards and Tony Stark inventing everything in the Marvel U.

So glad that I have the next issue to dive right in to see how this gunshot resolves.