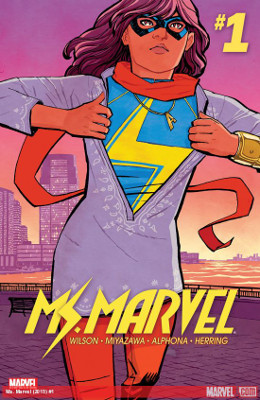 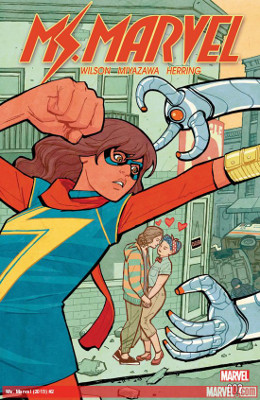 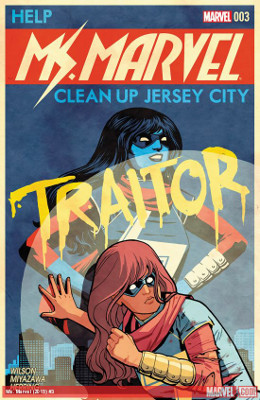 So good, I’m highly loving Wilson taking on a couple other modern topics: gentrification (and subset: marketing of a “good” neighborhood) and perpetual ‘business.’ This fits in nicely with the themes of adolescence and the very place — Jersey City — which so much of Kamala’s life is firmly grounded in.

THIS IS THE AMERICAN DREAM, PEOPLE!

Of course, this also means that Bruno has a girlfriend named Mike. She’s been dating him for a while — I adore her super cute style — and Kamala just catches on.

The new and improved Zoe is also great. Her rainbow hair is awesome.

Kamala also catches on that super skeezy and evil villain-style development corporation is using her image to further their evil. I love her hopping in the grocer’s car and driving away from the attacking mob and robotic bugs. And adore Kamala lamenting about not getting her corned beef bahn mi. Hahahaha. (Oh, this was me today when the place I like getting a huarache from changed their ingredients!)

Why does it not surprise me that Bruno has been taken over by Hydra? He would be an excellent resource for them. Not to mention, testing that purple goo puts him at risk in general and they’d probably find out.

Of course, Nakia’s on the news and talking about how terrible Ms. Marvel is. I’m still surprised that she doesn’t put two-and-two together, especially considering she and Kamala have been best friends forever. It does, however, quickly scale the personal.

Tyesha’s already the best. I wish my brothers would date someone as rad as her. Of course, who doesn’t immediately love a Dune quote, especially when it’s so fitting to those under the goo’s spell.

Adored how Kamala as Ms. Marvel comes to Mike for help with Bruno being taken over by nanobots and being used by Hydra and Faust. Also adored how Mike went from being very upset about the entire situation — as she should — to very much being Ms. Marvel’s sidekick. Their conversation about Bruno’s affections for Kamala was both touching and awkward. Loved how it played with the notions about how every story has two versions and how we see ourselves compared to how others see us.

Enjoying Miyazawa’s art and the details. His style is a nice mesh to Alphona’s, but brings in different parts of Kamala’s world.

Nice to see that even when Kamala saves the day that the people of Jersey City still are upset with her. Though they’re also pretty confused about why they were all about the gentrification via Hydra. I do hope that Wilson continues to use this theme in the newest arc.

Also I suspect that Mike will figure out sooner rather than later that Kamala is Ms. Marvel. Unlike Nakia, who can’t even imagine it.