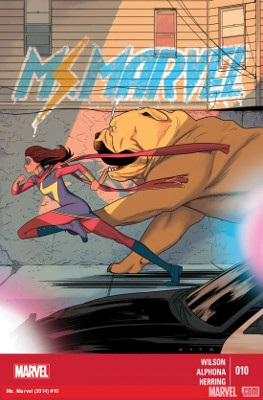 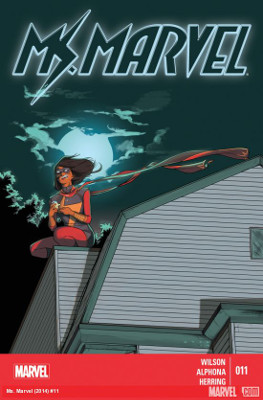 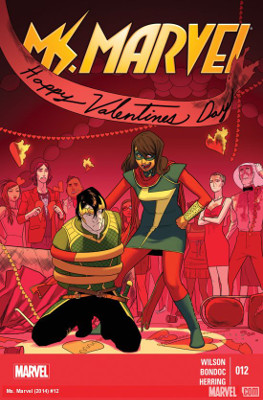 This issue serves as a connector for the story. We have Kamala ready to face the Inventor and stop him from using youth as his battery power. But we also have Kamala expecting backup in that the children, once freed, will help her fight back.

This is not what happens.

Instead, Wilson uses the story as a metaphor about how the up-and-coming generation is being treated by adults: like a burden. It is true that the planet has been destroyed, and there’s more overpopulation and under-employment than ever before. It’s interesting to see current events twisted slightly in order to fit a comic book villain’s plot. It makes the story 100 times more intriguing and relatable.

The ending leaves Kamala set up against insurmountable odds. Even though a couple of the teens and young adults have agreed to help her, Lockjaw’s been captured and the Inventor’s shown his hand in how many “batteries” he’s already acquired.

Lesson for all super villains: don’t steal Ms. Marvel’s friends. Shit got serious when Kamala saw Nakia in that glass tube. Yeah, the bird guy wasn’t getting away after that.

It’s been interesting to see the evolution of Kamala better learning how to use her powers. Though going from big to small isn’t necessarily a huge leap, but trying something she hasn’t done before.

I really love Alphona’s art in this book. The organic nature of it works so well, especially in a story about technology, about how the world is harsh to Millennials. It’s a nice offset. And also a reminder that those teenagers probably should aspire to be something else besides batteries.

I thought it was very fitting to have Kamala call in the cops. It was nice to see them respect her and her work and want to work with her instead of against her. The cop did have a good point about this drawing attention to her and was going to make the other criminals want to come after her.

I do love that Loki was actually sent on a mission from the All-Mother to investigate Kamala’s school for super-villains. (Which does make me wonder if we aren’t going to find that there was a real reason he was there and it wasn’t a mixed signal in the coming issues.) Also that all the people of Jersey City thought Loki was just an oddly-dressed hipster from Brooklyn was the best.

Bruno really doesn’t know how to tell Kamala how much he likes her. It doesn’t help that she’s completely clueless as to his affection. Even though every single thing he does screams how much he’s in love with her. It’s cute and very high school.

Since this issue was a little side story, it was nice to see Bruno and his brother Vick mending their relationship. And also seeing Kamala and Nakia having a sleepover and just doing normal teenager stuff. I’m still surprised that Nakia hasn’t figured out that Kamala is Ms. Marvel, especially after this issue. I mean, where does Nakia think Kamala ran off too?

Loki giving truth serum to high schoolers seems like a terrible idea in general. There’s just so many hormones and things like that. Seems Loki’s recent experiences as a teenager himself should’ve better kicked in his brain. Though he does love chaos.

I felt the ending of Loki and Kamala coming to a compromise worked really well. I like that he agreed to protect the school. Plus, it gives Wilson room to not have bad things happen to Kamala at school.

Join the adventures of Ms. Marvel with Volume 2: Generation Why.