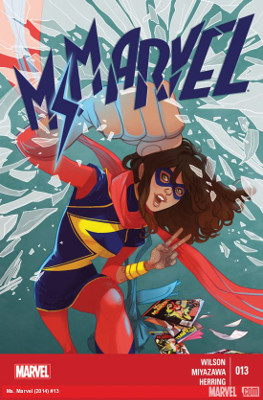 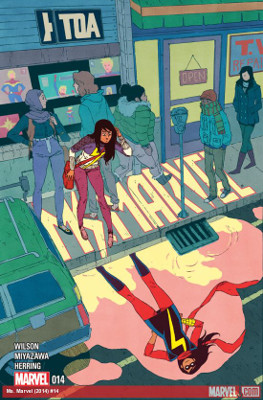 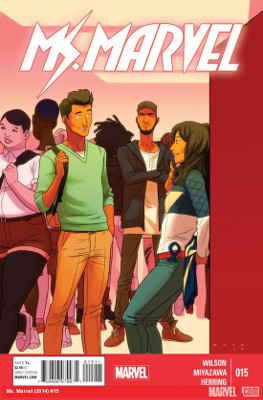 I loved this issue so much. It was the complete teenage romance trope, but tilted just enough in order to make it something new and different. (Even if Bruno’s going to get his heartbroken.)

Kamala’s exercise outfit is the cutest. I love it. Also love her confidence as she steps into the Inhumans’ training, which then immediately struggles to hang on as Medusa ups the difficulty levels.

I adore these issues that dig into Kamala’s family life and show her relationship with her parents and her brother, Aamir. Wilson writes them in such a way that you can tell how much they love her and each other. It’s really refreshing to see a superhero comic book with this kind of family dynamic.

Of course, Kamran is now a hottie, who’s also a geek. This is a lovely trope to see played out by a male character and twisted on its head.

Unsurprised to see that the streets are attacked by a super villain as they’re out and about. Kilowatt is a great D-lister style villain for Jersey City.

The only possible threat I see to Kamala’s romance is whatever the reason Kamran didn’t also try to save the day.

I through Kamran’s reveal in the alleyway that he also has powers — and that she looks like herself in her costume — was super sweet. So was Aamir’s concern over his sister getting hurt in the chaos.

And the super sweet just doesn’t last. Or more like what’s too good to be true probably is. Kamran’s working with some rogue Inhumans who believe that they’re superior to humans. Besides all that skipping school stuff!

I’m waiting for some combination of Aamir and Bruno to figure Kamran out. Probably Bruno since he knows about Kamala’s powers. Plus, with his crush on Kamala, Bruno double doesn’t like him. But I rather doubt Kamala won’t be at the center of saving herself.

The conversation between Aamir and Bruno was really well done. Their back-and-forth and Aamir’s knowledge of Bruno’s crush on Kamala was perfect.

Seems like Kamala needs some help from her Inhuman dog friend.

This issue was a brilliant statement about consent and also about heartbreak. Two lessons unfortunately often learned at the same time. Kamran’s speech about Kamala getting into his car on her own free will and thus everything being her fault was classic rape culture talk and victim blaming. Some smart writing from Wilson.

While I’m not reading the other books, I do wonder how New Attilan was taken over so quickly. Or so completely. Lineage seems to have some extra knowledge about Kamala’s family. (Or if he’s already been in contact with said family member.) His name is really too on-the-nose.

Loved that Kamala once again uses her powers by thinking about how to best apply them. Or other solutions such as calling Bruno via their code and trapping Kaboom in the training room.

The Star Wars quote was really cute. And I think at this point, we all want Kamala to start dating Bruno, you know, after she’s had a little time to nurse her heartbreak and work through what happened with Kamran. (Not to mention how she’s going to deal with him knowing her entire family and her secret identity.)