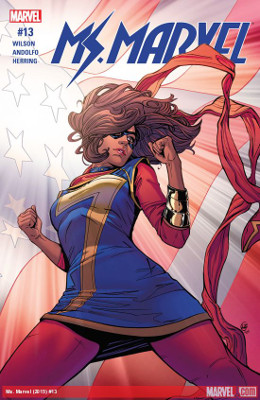 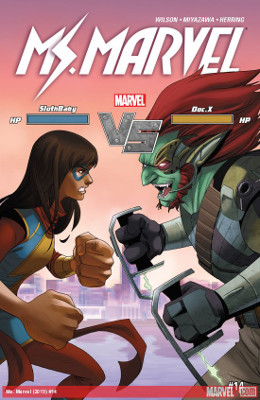 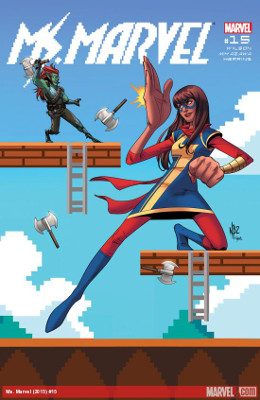 Even if my heart did swell a little bit with Kamala carrying the American flag and leading everyone to the polls.

I’m glad that we’re seeing Mike now helping Kamala. Though I’d like them to talk about it since Bruno leaving and him refusing to work with Kamala anymore on her superheroing. I need some closure with this relationship.

It was nice to see a comic book where the good guys won, and they won the election. It felt like a nice bit of escape fantasy that I needed about right now.

It was nice to see Kamala burning off some steam and playing video games. Of course, it also highlights the absence of Bruno in her life and how Mike only talks to Ms. Marvel, not Kamala.

This issue had lots of anxiety. It seemed like Kamala had her identities under control, until someone mentions her address. Then it seems like she might have them under control once again when she tracks the hacker’s IP address. But when she goes to his home, she discovers that while she may not know her video game friend’s legal name, he is actually a decent person who got his computer hacked.

Then, of course, it is Ms. Marvel who looks like the stalker. (I’ve also witnessed situations like this, and it does not turn out pretty when even internet savvy people who dig up information on others get their information dug up.)

But when the stalker reveals they know all of Kamala’s identities, it just becomes downright dangerous. Seems like Kamala needs help from more technical people. She may not be talking to Bruno, but she does know some Avengers. I hear Tony Stark is pretty good with a computer. Or Squirrel Girl, Koi Boi, Nancy, and Chipmunk Hunk. Yes, best crossover ever.

This issue wavered a bit for me on the storytelling front. On one hand, I feel deeply invested in Kamala’s world. I want to know what’s going on with her friends and her family and her own interactions with them. On the other hand, Doc.X isn’t my favorite villain, even if he feels very now, and I’m not sure about this twist that he is an actual computer virus come to life. (Or perhaps he is an Inhuman of a type we haven’t encountered. Or Tony created another Ultron, who hasn’t found his physical form yet.)

More Nakia and Zoe please. I’m happy this issue featured more of Kamala’s friends. We haven’t seen them for a while. There was some nice update to where Mike and Bruno stand.

It felt very that group of friends to invite Clara to come over to sit with them when she’s been shamed for having sexts leak. Though it is also fantasy as I don’t remember anyone being that kind in high school as everyone tried to deal with their own shit and hormones. It did feel very superheroic though.

In general, I enjoy Miyazawa’s art. However, when Kamala sat on the couch with her father toward the issue’s end, I thought it was her mother. In fact, I enjoyed the lines as the different levels of knowledge about their daughter’s superheroics. When it turned out to be Kamala, it felt less of a statement.

Doc.X playing with Tess Beckford did seem extra cruel. Curious to see just how Doc.X gave her superpowers. We’ve seen people take over others’ minds before in this manner, but haven’t seen the superpowers with it. (At least, not that I can really recall. Though I’m sure someone’s done it.)