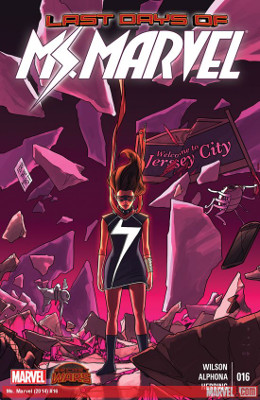 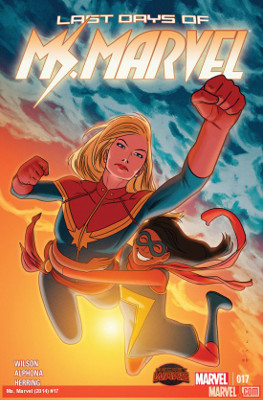 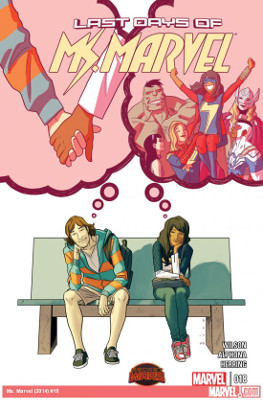 Love Kamala eating her feelings with hot dogs. Even if I think they’re gross, it fit well with her character. That and staying away from her home so she doesn’t get questions about Kamran from her family.

Of course, that’s the time Kamran will come to visit the family who already trusts him. Very convenient that Aamir never got hit with the Terrigen mists. Kamala’s world will definitely change if her brother gets powers.

Loki’s spell over the high school to protect it saved a ton of people from chaos. The moment where Kamala looks over the room was very sweet and poignant. It also, rightly, overwhelmed her and her feeling of responsibility.

And so excited to see Kamala team up Carol. All the Marvels!

This is story seems to be one Marvel (and other superhero books) have needed to tell for a while: a new hero getting to play a minor, but important, role in a big event. Kamala isn’t heading to NYC to fight. She isn’t the key to stopping the big Event. Instead, she’s the only superhero left in Jersey City to protect it. Well, until Captain Marvel bids her adieu.

The scene with the kittens nearly killed me. Carol was correct in that Kamala couldn’t save them and go and save her brother. However, she can definitely come back for them after she takes care of her brother. Keep the kittens safe!

Her brother who’s suspended in the Terrigen Mist, and I guess we’ll be able to find out if he also has Inhuman genes.

I am surprised that Kamala’s parents haven’t discovered something’s up. Especially in the way she ran off to go help people after directing them to the school.

The only thing that threw me off was Carol insisting that she has to get back, but then they slowly go through Jersey City. Carol can fly way faster than Kamala can embiggen her feets and legs to hop rooftops. You’d probably want some speed in an emergency situation.

This entire Secret Wars and end of Marvel U thing is rather annoying. Wilson does the very best she can, but the ominous warnings from Carol are a bit much. And things like that make me have less confidence that Marvel editorial knows what they’re doing.

Who knows exactly what Aamir was exposed to and if we temporarily have another Khan with powers or if it’s permanent. Despite Kamala seeing her brother’s rant against powers as a rant against herself (which is was somewhat), he does make some good points about being comfortable with himself and liking who he is. Which is a pretty powerful statement for a teenager.

What really pushed this issue from four to five for me was Kamala and her mother’s interaction. I love how she realizes that the end of the world can’t come without her telling her family the truth. The very best was that her mother knew she was Ms. Marvel the entire time.