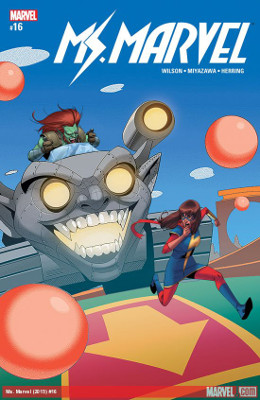 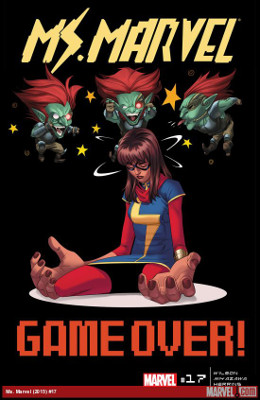 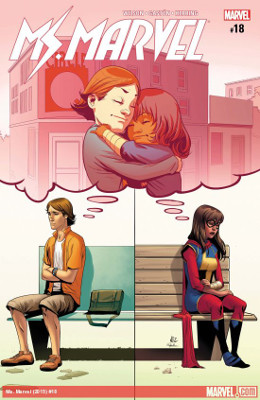 This is, I believe, the first time that we’ve seen Kamala in a situation where she’s ready to give into the bad guy to save herself and save her friends. It’s great to see she’s mostly worried about Zoe and her feelings for Nakia being broadcast to the entire school. Sure, Kamala’s terrified of her secret identity being outed, but Zoe’s feelings are also a top priority.

Of course, this is also the first time we’ve also seem Kamala take on a villain completely by herself. She doesn’t have her gang. She even calls in perhaps the last favor from Bruno in this issue. Kamala’s more alone than she’s been since she started being Ms. Marvel.

I did love, love the moments with Zoe. Both Kamala’s conversation with her about what was happening and Zoe’s own confrontation with Nakia and admitting to her feelings. While it’s sad that Nakia doesn’t feel the same way, I loved how Wilson dealt with the plot point. I’ve fallen for a few straight girls in my time. All the feels.

Miyazawa is perhaps my favorite Ms. Marvel artist. He brings the kind of movements and facial expressions these characters need, and fills in the delight of this world. Even when Kamala’s struggling and fighting bad guys.

Is this plot going to essentially end like “I Robot, You Jane?”?

Definitely called this wrong. Doc X didn’t build himself a body. Kamala got to him before he could get to all the people. Instead, she destroyed his base code with kindness.

That’s right, this issue is about making the internet nice.

I love how her gamer pals immediately laugh at the idea. But Kamala is correct, they did come all the way to Jersey City just to help her when they didn’t even know 1) who she was or 2) what she really needed.

Loved the joke about a LAN party in a convenience store being peak Jersey City. Which is a nice throwback to Kevin Smith’s movies in a yes, problematic, but still nostalgic feeling.

I also had the same question as to why a superhero who spends her time fighting bad guys would then want to fight fake, virtual bad guys.

The hallway hug with Zoe at the center was completely cheesy on so many levels, but I fell for it with big tears in my eyes. (I blame the news.) Sometimes, there just needs to be squishy emotions.

Oh, Bruno. It’s nice to get some finalization on what’s up with Bruno, and how it’s much more than just him recovering from some broken bones this is. And more than him just joining an elite program in Wakanda.

The big emotional reveal for readers is that Bruno is not just temporarily hurt. The damage done to his body is permanent and degenerative. Bruno will be disabled for the rest of his life with his fine motor and mobility skills impacted. Which is a blow for him in what he wants to do with his future.

We can now understand why he’s pulled even further away from Kamala and also Mike. Despite the fact that he misses his friends.

Bruno also feels socially isolated. We find out that this isolation is both related to his disability (and his own isolation) and cultural differences he perhaps doesn’t understand. We feel isolated with him because we don’t know these kids the way we know the ones back in Jersey City.

Kwezi is a little bit like the Tony Stark of Wakanda. Or perhaps he wants to be like Tony when he grows up. He doesn’t give Bruno all the information about their vibranium heist because he knows Bruno won’t go for it. Plus, Kwezi could’ve used his royal connection to get vibranium without stealing it, as Black Panther points out when he rescues Bruno and Kwezi off the rooftop.

But here Bruno makes a new friend. A friend who wants to help Bruno, but realizes that perhaps what Bruno really needs is that friendship and sense of adventure.