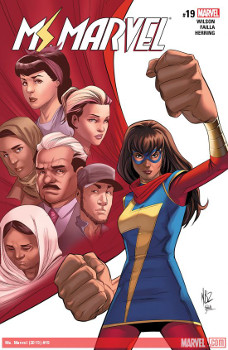 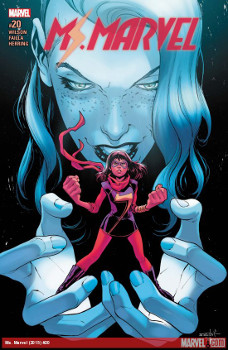 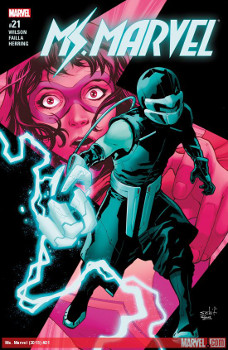 As always, Ms. Marvel remains timely to what’s going on in the US right now. In fact, this book may be the only piece of serialized media I’m currently consuming that even attempts to address the current political climate. Of course, the book does it without mentioning that guy, which is fine, and it works well.

Failla is another great addition to the Ms. Marvel artistic talent that’s graced this book. Seriously, Wilson gets the best artists in the business, which is almost unheard of in an ongoing that’s lasted this long. (Even if it’s gotten several reboots to match whatever current numbering scheme Gabriel over Sales and Marketing has.)

Oh, Kamala, you are once again after my own heart. I too declared that I was becoming a vegetarian when my parents decided to butcher chickens. (Which we did that butchering ourselves compared to the outsourcing for cows and sheep.) The only difference is that I did become a vegetarian.

I’m kind of surprised that Tyesha is pregnant. You’d think that she and Aamir might’ve waited to be a little more settled in their life. He, at least, never seemed to have a steady life direction and career. Maybe Tyesha has a great career.

The little ways that Wilson explores family, culture, neighbors, and ultimately how microaggressions lead to macroaggressions is brilliant. Kamala’s family is both every family who loves each other, and serves that need for cultural learnings. Again, Wilson shows her talent as a writer to develop empathy and show common ground and celebrate uniqueness.

And to think this is also a superhero book!

I hope Kamala beats down basic Becky to save her brother.

This is one of those set up issues. This is a cliffhanger, which makes me impatient, but I’m not sure enough there’s enough stuff to make it a pleasurable issue on its own. In this storyline, it will definitely work well in trade paperback form.

Aamir is definitely in trouble. Wilson does a great job at showing how fruitless any defense he might launch for himself would be. Faila’s pencils serve to show the starkness of the situation.

The rally reminded me a lot of one of the earlier rallies against superheroes in this book. It felt like a rerun with this neighborhood (or the bigots in it). And yet another situation where it doesn’t matter what our hero actually says. No one’s mind will be changed.

I guess that’s the bigger question, how do you change people’s minds? And can you change the minds of those who would just drive you out of the neighborhood because of your superpowers, skin color, religion, or anything they view as too different?

By far the most interesting part of this book is Kamala uncovering that one of the super fascists is her classmate Josh. Josh is exactly who we expect him to be: he’s a straight white guy who doesn’t want to hear that he has institutional privilege, so being a fascist is his rebellion.

I get the story that Wilson’s trying to tell, I just tire of this narrative. Especially as we watch others get hurt.

I also get that you have to get vulnerable with people, and that’s why Kamala takes off her mask in front of Josh. But this only works because it gives them a level playing field. There is around 20% of the population who will never be moved by the human condition and connection.

All the stakes are done incredibly well.

I also enjoyed seeing Aamir out of his element and in his sister’s world. However, Sheikh Abdullah may never get over this. I did enjoy how Wilson worked in the fact that most of the other guys had never been in a mosque before, or even thought about what it might look like inside.