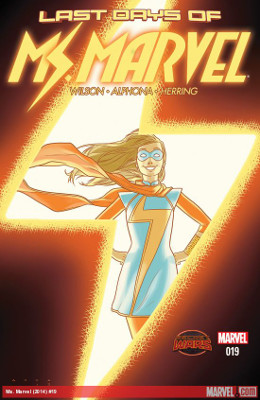 This book pretty much gets five stars for the entire conversation between Kamala and Disha. Such a lovely recognition of a great mother-daughter relationship. Disha understands how the values she’s installed in her daughter have translated into Kamala — once she got superpowers — spending her time being a hero and how proud that made Disha.

Alphona draws this scene beautifully. With the perfect emotions on their faces. So many hugs and so very real.

Also loved Kamala just taking the time to spend these so-called final moments with the people who she cares about. Or those that she’s worked so hard to save from utter disaster.

The moment with Zoe was great. It was a good contrast to see that other characters — who don’t necessarily know or understand the extent of the world ending situation — having thoughts about how to be better in their final moments. Certainly a sincere apology from Zoe with lots of depth about herself and how the patriarchy has influenced her behavior.

The scene with Nakia was also very brilliant. The Frozen references definitely made me crack up. There was certainly a nice acknowledgment that Kamala hasn’t been a good friend to her. I do think she needs to tell Nakia about her adventures as Ms. Marvel; however, the quiet prayer corner was not the place for it. The fakeout about everyone in the Muslim community knowing Kamala’s superhero identity was cute, especially since it was just about Kamala’s dating mistake with Kamran.

Dance party for the win! Basically the best thing ever.

Oh, Bruno, he does love Kamala so much. It takes so much inner strength to have critical conversations, even at the end of the world. And this is what makes Kamala a superhero. Brilliant, so brilliant. I love Kamala choosing herself and her recognition that her time as Ms. Marvel is more fulfilling than anything. Even if she does love Bruno back.

Thankfully, this book is continuing after whatever Marvel is doing in their event.