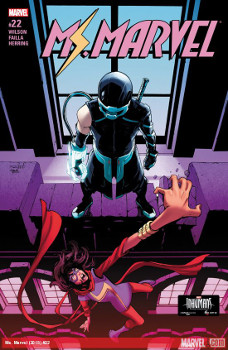 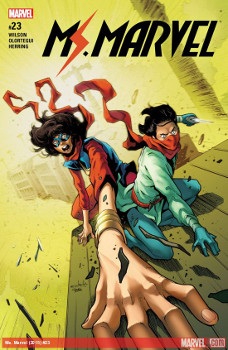 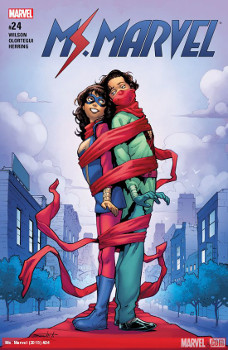 Kamala wasn’t really able to convince Josh to do anything more than stall the fascists, and then give himself up to law and order. He still feels the same. Josh even tells Kamala that next time they meet, things won’t be different.

I really want to hear more about Tyesha’s and Nakia’s conversation. Kamala’s been superheroing so much, and besides everyone being sad about Bruno, we haven’t seen much of them. The evolution of faith is an interesting one. And it’s nice to see nuances between these two women and what they believe.

My favorite part was definitely Tyesha leading the crowd. She’s not going to take any shit. Tyesha will see her husband freed and justice happen. She won’t let holiday, pregnancy, or anything else stand in her way.

Nothing was more satisfactory than Becky being handcuffed and taken away.

In a way, Lockjaw is the one who really understands Kamala. He’s a different part of her family and community, but one she doesn’t have to hide anything from.

It’s cute that Kamala is actually sad her brother and sister-in-law are moving out. Of course, she will miss them as we know the siblings actually go greatly love each other. If nothing else, the last plotline showed that.

Those were some great subtle digs at the US with Bruno getting Wakanda citizenship to protect his young scientist mind and Kamala eating GMOs, everyone’s favorite breakfast cereal. (Even if the anti-GMO movement is pretty anti-science, it was funny, which was the point.)

The best dig, however, was Kamala’s teacher assuming she’d know this new student from Pakistan — and it’s entirely possible that Kamala’s parents talked to the teacher and forgot to mention it to Kamala — but then it is Kareem, and she does know him. It was cute to see all her friends annoyed in support, and then shocked, and then Mike getting a new crush.

Sometimes I just want more of Kamala with her friends, and perhaps Kareem’s addition will give us more of this. Though I’m constantly still surprised that not more of them know Kamala is Ms. Marvel.

Which gets me to what I disliked about this. I dislike that Kamala and Kareem don’t put two-and-two together about their superhero identities. Seriously, Kamala shows up in Pakistan, and suddenly Ms. Marvel is also there, and then Kareem moves to Jersey and Laal Khanjeer/Red Dagger also arrives. This is not hard to figure out.

The other part I didn’t find as amusing is the Jay and Silent Bob cameo. I know, not really them as they changed them just enough…but yawn…so over anything Weinstein produced that helped Affleck, Damon, and hell Kevin Smith.

What I find most interesting about this issue is that Kamala has big emotions here, and emotions that don’t even match how the rest of the characters are behaving. Her emotions are the unreliable narrator in how Kareem feels about her and their superheroing.

In other words, Kamala has big teenager overfeels. It’s both kind of refreshing and a large tonal shift for her. I do wonder how Wilson will deal with Kamala wanting to take time for herself. What does herself mean? Does that mean less Ms. Marvel? Does that mean she’s going to leave her family for bit? Kamala did have that brief time where she hung out with the Inhumans, but it didn’t make long-term sense for her. Especially since her mother knows she’s Ms. Marvel.

I’d like to see Kamala’s need for validation from the community and from the media be explored at some point. She seems to lean a lot more on that than just her sense of civic duty lately. Which is perhaps an aftereffect of the loss of Bruno.