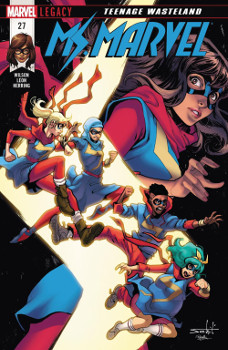 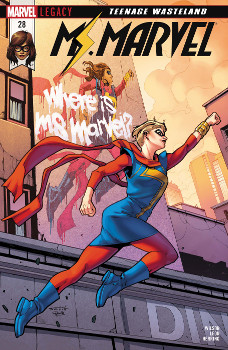 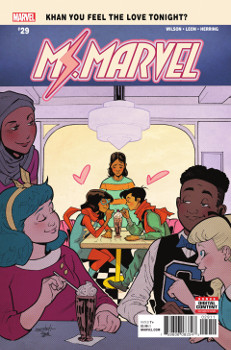 Ms. Marvel is missing something without Kamala. I care about these characters, but I also want to be on the journey with Kamala.

Naftali is pretty funny. I thought the shopkeeper’s comments about Kamala’s smelly, fuzzy hat were great. A nice reminder of Kamala’s teenager status, which especially lately, we tend to forget a bit.

I do very much love Leon’s renditions of everyone in their own take on the Ms. Marvel costume. The customizations were just perfect. Same with the plays on their strengths and weaknesses. I like how the Red Dagger seems to lack superpowers, and how he admits to being in over his head with fighting the Inventor.

Harold and Zoe still should have their own spin off.

And yes, Mike, we all knew what that pendant was going to do and who it was going to call. I assume it will take Carol approximately half an issue to take the Inventor down. Though I wonder how much she will involve Kamala’s friends in the mission.

There was a lot about this issue I liked, but it seemingly lacked Kamala’s viewpoint. Well, until the very end when she defeats the Inventor, makes up with Carol, and rejoins her friends at school. I suppose she wasn’t getting anywhere with her feelings by hiding at the private school, and it did take her re-fighting her first villain and then seeing all her friends to remember.

Though it does still bother me that Kamala seemingly still has a “secret identity” around her friends. Like they wouldn’t put 2 and 2 together about Ms. Marvel disappearing around the same time as Kamala. I really hope someone points this out next issue.

The Carol here felt back to a form that I haven’t read a Carol-story in a long-time. She’s strong willed and no nonsense, but she also knows how to navigate and rebuild relationships. Carol herself has changed a lot since she first met Kamala and then since their parting of ways. It made me rather want Wilson to write a Carol book. (Of course, I’m perfectly happy that Wilson’s upcoming book is Wonder Woman.)

I do wonder if they are all going to continue to fight as Ms. Marvel going forward, or if the mantel is taken again. This book is so much about community that it would make sense for Kamala to have a fighting force beside her. I mean, essentially Bruno was in the early days, and then she tried to work for Carol with other teens, which didn’t work out.

Wilson is very skilled at writing pivotal issues for Kamala. In this issue, her nephew is born, she had her first kiss, and Bruno comes back to town. There’s so much emotion for all these characters, and hey, this is what I love more than smashing baddies.

Of course, Aamir fainted during the birth of his son. We wouldn’t expect any less. Though I did wonder where Kamala’s parents were. I didn’t notice their absence until doing this review, and it was likely Wilson just wanted less characters, or specifically the next generation of family together.

Leon’s art of happy Kamala bouncing through Jersey City was great. And played into the range of emotions that she feels throughout the issue.

I imagine a lot of fans will be upset that her first kiss was with the Red Dagger, and of course, Bruno saw it happen. And he also would’ve seen Kareem’s face.

Poor Mike. I get that we want resolution between Kamala and Bruno, but Mike deserves closure too.

Kaylee is definitely a super villain, not just a mean girl. Look at that locker damage that smitten Zoe cannot even see.

The Imam is hilarious. So hilarious. I love what he says to Kamala, both in his advice and his acknowledgment that they fail young people when they don’t talk to them how to deal with their feelings and these situations. It’s true, too many adults do not prepare teenagers for romance because they just don’t want them to do it. And he’s so right that it’s a blessing to have Kamala talk to him about it.