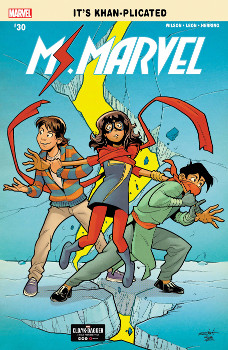 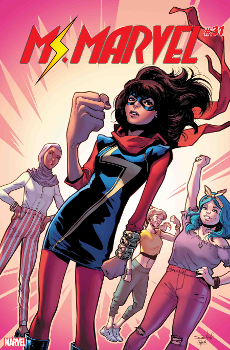 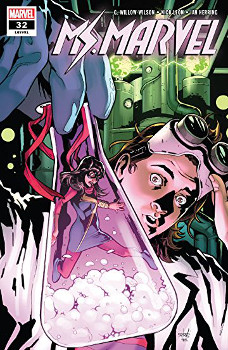 What a lovely ending to this plot. We’ve figured out a lot of teenage romance problems — except Mike, poor Mike — and Ms. Marvel is back in action. Seems like her second kiss will definitely be with Bruno. I’m okay with the easier out of Kareem heading back home. Though, really, if Kamala doesn’t figure out who he is…

Okay, Zoe did figure out Kaylee was evil. I guess I should give her more credit. That cute girl Alanna is great, and I’m so happy about this development. It was recently announced that Wilson’s moving off this book — after a very long run — and these characters are the types of features that make this world so special and too often get lost in writerly changes.

The school dance atmosphere was perfect. Leon did a great job with the styling and characterization of everyone in their formal wear.

Kwezi and Bruno’s parting was perfect for two friends. I love seeing affection between teenage boys as it’s so important. Though I will miss Kwezi and his tourism.

I have to hand this to Wilson, she knows how to make a coherent supersized issues. She does this with the same deft of tackling crossovers and having them make sense for the comic’s continuity, instead of a major storyline shakeup. I loved the overall framing of Kamala’s sleepover and how she just kept having to leave the house for some superheroing.

Additionally, keeping both Herring on colors and Caramagna on letters made the book feel consistent art-wise. That and the other artists definitely followed Leon’s styling choices.

I loved the ending of this a lot. Of course, Zoe, Mike, and Nakia had long figured it out that Kamala is Ms. Marvel. Anything else wouldn’t have made any sense, especially when Kamala and Ms. Marvel disappeared at the exact same time. I like that Gabe also knows, and that Bruno tried to continue to keep the secret.

Kamala’s flying sloth pajamas were too adorable. I definitely want a pair myself and a stuffie like hers. Get on that merchandising, Marvel. Also I want Kamala’s mom’s samosas.

I’m also glad that Kamala and Mike are having a conversation about Bruno and their romantic entanglements with him. Especially as Kamala prefaces it with acknowledging how important her friendship with Mike is.

I appreciated how Kamala both felt empathy with Skunk Girl / Samantha and was honest about how she wouldn’t want those powers either. No one wants to smell like a skunk, and Kamala definitely won in the powers department. It would be nice to see Kamala hang out with some other superpowered teens, in addition to her friends.

The story with Miles was a bit weaker, which makes sense given that Minhaj is not a regular comic book writer. Kamala likes Miles, but not like that. It was cute that he thought he had an Infinity Stone, but it was actually just a mood affecting truth stone. And that he never really explained to Kamala just why they were breaking into this government facility.

I do hope as Wilson leaves this book that we continue to have bits of this world and bits of Kamala with her friends.

It’s so cute that Bruno and Kamala think they can reset their relationship with each other, even their relationship as hero and her Q. Yeah, there is too much history between them, and way too much chemistry with them, even when things have changed.

I do like that they both find each other. And it’s cool to see them together try to figure out what Kamala’s power actually do and where they come from. Bruno is correct that it would be an advantage for Kamala to know. He’s also probably much nicer to her than scientists at S.H.I.E.L.D., or other super labs, would be.

I appreciate how Wilson has thought through Kamala’s powers, and how the device that was supposed to measure static changes caused Kamala’s powers to go haywire. But, as Kamala points out, it’s not just static electricity as she doesn’t have issues using a cell phone.

It’s kind of nice to have the Shocker, a villain we kind of know, as the baddie here. He doesn’t require a lot of exposition on who he is or what he’s about. I like that he just decides doing crime in NYC is too hard with all the heroes around and goes across the water into Jersey. Seems like other criminals would follow that pattern. Why try to do crime in places with lots and lots of heroes?