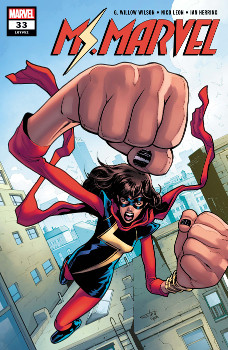 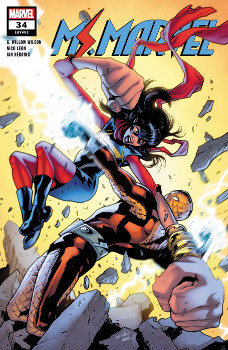 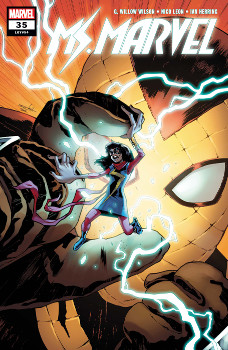 I continue to enjoy the kind of quirky, old school villain that the Shocker is. Especially as Kamala calls him out on his ridiculousness. The rolling ball and other elaborate traps worthy of Indiana Jones movies in his above-ground hideout are funny. Same with the mailbox that clearly says, The Shocker.

The gag with the Professor X knowledge ball is also funny. It’s all those relatable ways that smart phone interfaces don’t work. We’re all at a point where Siri/Google/Alexa can help, but cannot quite help when actually needed. The joke about Bruno picking it up at a thrift store in an occult bin was also cute.

I’m glad that Bruno wasn’t in real danger from the Shocker. We’ve certainly already gone down that road, and as much as I appreciated it, it’s time to move toward what is next for Ms. Marvel and her crimefighting. Especially since it’s clear that Bruno just cannot stay away from Jersey or Kamala.

It’s also fun to just feel the lightness and joy that Wilson and Leon put into these final issues as their run wraps up.

I appreciate that it is Bruno here who sees the different versions and different possibilities for Kamala’s life. He even sees himself marrying her, and himself in a wheelchair. (It was nice that he noticed the marriage first as that’s certainly what I noticed.) I also adored the idea of Kamala as POTUS.

I may have spoken too soon about Bruno being out of danger. This bolt from the Shocker is a cliffhanger, yes, but a little more dangerous than their first encounter. While Kamala seems to have many possibilities, it does seem inevitable that Bruno will lose more mobility. I liked how the gag of the Professor X knowledge ball turns into Bruno seriously asking another person with mobility disabilities about his life and how he learned to cope with his situation.

I appreciated how Bruno came to the conclusion that his original hypothesis around Kamala’s powers being on the fritz was wrong. And how he solved for learning that she draws on herself in different timelines and times to use them.

The inclusion of Singularity was cute. Nice throwback to another Wilson book, but I’m not sure the greater impact except Wilson wanting to write her once more. Plus, if Kamala has many possible futures than who knows what her encounter with that guy in the past even means.

Leon’s art is great here. The ways he has Bruno struggle physically and express it in his bodily movements were spot on. Similarly, I enjoyed the fun ways he had Kamala’s body fail her, but in wackier ways to contrast the two and their very different situations.

Once again, Wilson nails the ending. What’s important here is how well Bruno and Kamala know each other, and while they haven’t sorted their romantic feelings for each other, their friendship is the base of everything and that’s what is important. I think it’s great for Wilson — and great for YA books in general — to show how friendship is a solid base and how much respect Kamala and Bruno have for each other so if they do finally get together romantically, they will have a healthy relationship with each other.

Of course, Kamala pulled Bruno to safety just in time. She’s not going to let him get hurt again.

It was funny to see that the Shocker expected to get more powers from the wormhole, but the only thing he got was a trip back to Brooklyn. Was it cheaper than taking the MTA? Certainly made him more motion sick. The gag about him not being able to vomit into his mask was hilarious.

I liked how Bruno didn’t know if they were ever going to get out of the wormhole and wanted to tell Kamala his feelings. It felt right. And it felt right that Kamala put in a pin in it to talk it out later.

Singularity didn’t feel anymore relevant to have in this issue, except to have two superheroes against the Shocker.

Leon’s visual gags were funny. The goat floating in the air was too fun, and I liked the little things like the people stuck in their chairs in the trees after the wormhole was closed. Sometimes we forget that comics are funny books.