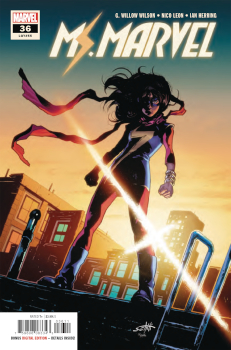 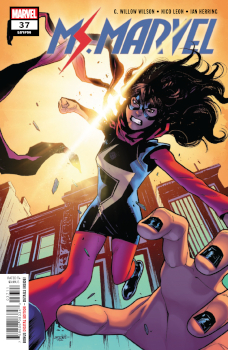 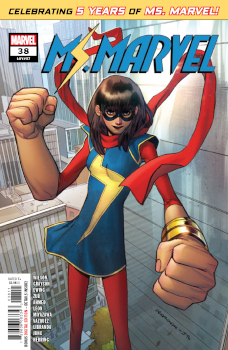 Historical Bruno loses out to his lady love Kamala with the Inhuman Farak. As much as it was nice to see that Kamala’s Inhuman DNA is about love, not about experimentation or other horrors, this issue felt light. Especially since the setup seemed to be about Bruno and Kamala working out their feelings for one another.

Yeah, it would’ve been terrible to travel like that: no regular baths for one. You either get stuck on a horse, or you get stuck in a stuffy wagon. At least they had a lot of pillows to help with the bumps in the road.

It seems like the Kree would’ve had some better weapons than light up swords.

This issue was cute, but overall, it didn’t do much for me.

I loved this Jersey City mayhem. Of course, it was just infrastructure. Which honestly, given the entire crumbling infrastructure of the US, we need to have more stories like this. It was also a cheeky back-to-the-beginning for Ms. Marvel.

There was the perfect amount of baby Malik. He was just disruptive enough and enough of a plot point. Malik gets in the right amount of trouble to be part of the Inhuman family too. That was fun.

Yay Zoe was out on her date. Even if Naftali was playing tour guide and punk rock splainer. Life must go on.

I’m happy to get to see Harold one more time. It was funny how he said that he didn’t recognize Mike and Nakia out of their Ms. Marvel costumes.

In many ways, this was just Kamala’s life. Her with Gabe and them both having to watch their nephew. Sheikh Abdullah has a heart attack because he is old, not because he had to survive any horrors or encounters with villains besides heart disease. After all these issues, Aamir will finally get a job; he’ll be replacing Abdullah as Iman so Abdullah can rest and take better care of himself. Kamala’s mom getting after Kamala about having wet hair and catching a cold. Perfect.

Can’t wait to see Malik start to develop his powers.

I feel that I appreciated this ending more than I possibly enjoyed it. This issue was as cohesive as possible, given all the creators, both writers and artists, who worked on it.

And I appreciated the sentiment behind letting Kamala go to others from Wilson. I cannot imagine how hard it must be — even if others have written Kamala too by now — to create a character, an impactful character, and spend so much time with her, while always knowing that Marvel owns her must be a hard thing. While Ahmed is a good choice for the next series writer, I imagine there will be future stumbles on Marvel’s end with creative and creator decisions. There always are.

Kamala’s good mornings to her family — and the excuses to have her brother, sister-in-law, and nephew there — worked well to say goodbye to this version of Kamala Khan, even if I don’t see Ahmed unhooking her from her family or Jersey City.

The video game stuff, including when previously Kamala fought a video game villain and the Squirrel Girl/Ms. Marvel crossover, is not my favorite. I do applaud all the artists who choose the best outfits to bring out the different personalities of Kamala and her friends.

The ending was incredibly sweet with the scene of them as children, and then in a group hug. (I know this ignore Ahmed’s teaser, but don’t worry, the new series is in my to-read pile and on the pull list.) Kamala is all about community love, and this final issue doesn’t disappoint in her message.