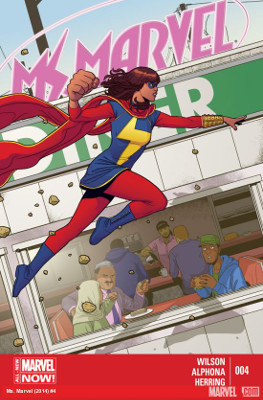 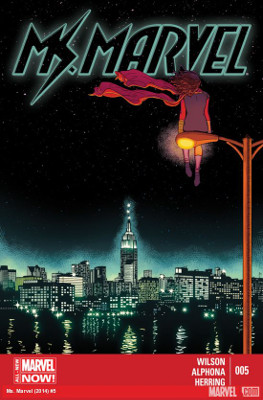 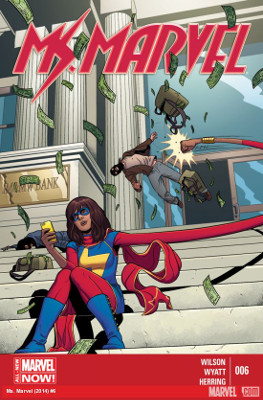 So I take it the store doesn’t actually have a camera? Or did I miss Bruno taking out the footage so no one knows the it was Vick and knows that Kamala was the superhero? Seems like the police let off everyone pretty easily? Again more property damage.

I liked that when Kamala tried to change back into Carol, she was still shot. But those healing powers are very convenient. Even if she can’t shift while healing.

Using the burkini as her costume was pretty funny. I loved her mother questioning why she needed it, but then giving in anyway.

Yeah, looks like Vick and Kamala are in over their heads. But very fitting.

I really enjoyed the outcome of Kamala having to save herself instead of being able to save Vick completely. Also glad to see that in the meantime, no one was hurt. Well, Kamala got even more grounded.

I loved seeing Kamala so tired and so hungry and just wanting her mother. This was so very much the teenager who’s pushed her boundaries and having major problems, wanting the comforts of home. And then having it be her father to really be the comforter as her mother was overwhelmed.

Oh, super snot. Gross, but I like that it’s a home-grown solution from Bruno and that Bruno may have made it, but Kamala realized its application.

The Inventor being a chickenman is too great. Especially since everyone’s so scared of him. Though it seems weird that he’d be making his minions steal $100 from corner stores. Seems like super small potatoes for anyone who’s trying to be an actual supervillain. I guess it is New Jersey.

Okay, this is my obligatory, I miss Alphona on pencils. Not that Wyatt doesn’t pick up the task admirably. This book remains the bomb.

Love how Kamala will just throw herself into fight after fight. She’ll kill all the bots that come after her from the Inventor. But she gets scared when her father tells her she must talk to Sheikh Abdullah about what’s going on in her life.

Which I adored Abdullah and Kamala’s conversation so much. I love how Kamala underestimates him, and how while he doesn’t know that she now has superpowers and has been fighting evil, he trusts her that it’s just not boys or a more typical teenage problem.

While it’s very fitting that Wolverine is mentoring another young girl, I’m not so sure about how I feel about yet another Wolverine story. (Maybe I’m still bitter about Kitty Pryde getting basically written out of X-Men: Days of Future Past movie version so we could have yet another movie about Wolverine.) Though as someone who’s written a lot of fanfiction, I cracked up a ton at Kamala’s comment to him that her story about Wolverine and Storm was popular, but not as much as Emma and Scott’s Paris romance fic. And then the Doge meme…hilarious.

I do like that there’s more than a random reason why Wolverine was also fighting the Inventor. The crocodiles and Thomas Edison, the bird clone, were a little ridiculous. The Inventor also seemed much less evil and scary than the earlier books had led us to believe. Or for someone who’s actively kidnapping teenagers.