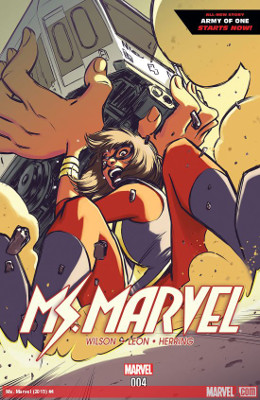 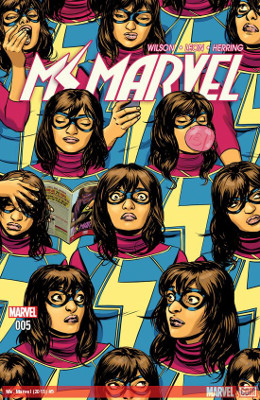 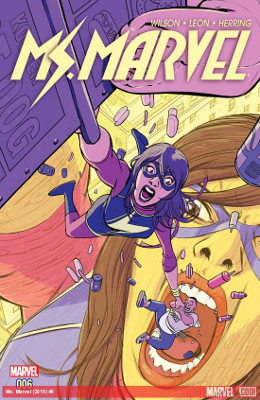 I love that Kamala is super excited about her future sister-in-law, until she realizes that Tyesha will have to move in with them. I am surprised their parents didn’t know that Aamir and Tyesha were seeing each other with Kamala serving as their chaperone. But perhaps Aamir predicted their reaction.

Yeah, Kamala making golems of herself is not going to end well. Perhaps everyone just might figure out her secret identity. An army of Kamalas won’t go unnoticed. Especially by her family and friends. I’m still betting Nakia and Zoe will find out soon. Kamala’s bound to notice how close the two of them are getting, when she’s been so distracted.

I do feel sorry for Kamala when she had to call in the other Avengers. Obviously, she’s very proud and trying to prove that she deserves the spot on the team. But I have a feeling it will be the Avengers that she has to give up for a while. She will realize that her family and her schooling — her community — are more important.

Or maybe things will come to a head.

The entire golem thing is pretty hilarious. Seems like the wackiness that fits Kamala’s continued adventures. I like Bruno and Mike being part of that wackiness and being the science squad. This book continues to be one comic that, minus the superheroes, feels like the real world with its mix of people.

Seems to me that people are going to figure out something’s up with Kamala when there’s a billion Kamalas being extra strange and then a giant golem. Someone’s secret identity seems to be threatened. At least Nakia and Zoe need to be put two-and-two together.

I continue to adore Kamala’s family. Tyesha remains the best. And with Kamala’s mom knowing about her being Ms. Marvel, I at least expect a firm lecture from her for ruining the engagement party.

This was a really great wrap-up of this arc of Ms. Marvel. Wilson does a wonderful job at getting right to the point of what Kamala really cares about: her family and her school. Being a superhero and being an Avenger are amazing, but she has priorities. That’s an important lesson about growing up.

And also the lesson of calling for help when you need it.

Of course, Bruno created a giant dinosaur to eat all the golems, and of course, that didn’t work. Leon’s art was just so fun here. It gave the perfect atmosphere of chaos, but also the joy of Ms. Marvel as a book.

Mike being skeptical of Bruno’s ceremony to bring Loki was pretty hilarious. Also classic Loki to watch all the destruction happen and not do anything for a few moments to giggle.

Adored Carol and her sparkle-fists. Not to mention, how she thinks Tony isn’t doing a good job at mentoring Kamala.

Tony hugging Kamala and telling her that no one was going to be mad if she stepped back from heroing for her brother’s wedding and her school was endearing. That hug! And telling her that’s what Google Calendar is for cracked me up.

I love everything with Kamala’s family, and Tyesha and Aamir’s wedding was just lovely. Wilson’s so great about adding culture clashes and knowledge without her comic feeling like “and here I’m going to teach you a thing.” Of course, they’d honor each other by wearing the traditional dresses of each other’s families. Such sweetness.