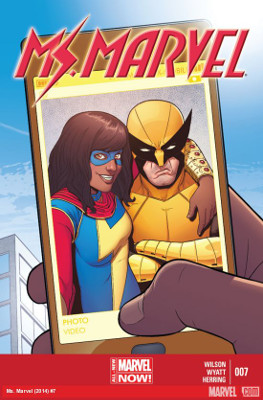 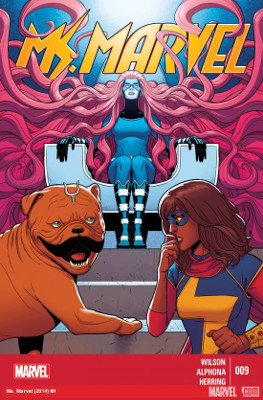 Just when I thought this book couldn’t get anymore awesome, it just did. Lockjaw!!!

In a lot of ways, Kamala and Wolverine’s team-up reminds me a lot of all the best parts of Wolverine: First Class, which looked at his mentorship of Kitty Pryde. It’s fun and can be serious, but teaches both characters something.

I enjoyed that Kamala made enough of a positive impression on Wolverine that he contacted Steve Rogers to talk to Medusa. I didn’t read the large crossover about the Terrigen bomb, where Kamala got her powers from, and have been pleased that Wilson hasn’t made the assumption that we’ve read it.

I loved the scene of them running up to get out of the sewers. Wilson certainly has a way with dialogue and Wyatt’s pencils are creative enough to compliment it. Loved Wolverine being freaked out about Kamala being able to lift him. Also enjoyed her talking about how many heart attacks her parents would have if they knew about her superpowers.

Which they may soon when Lockjaw shows up in her life. It’s pretty hard to hide a giant Inhuman dog.

I freaking love this book so much. It’s one of my very favorites. I look forward to reading it every month.

Lockjaw is just a delightful addition. I love the beginning where he runs over to her and everyone is scared. The pug in that scene, which also looks like Grumpy Cat, is the very best. A teleporting dog is both handy, but also a bit much.

Lockjaw looked so weird in the Khan’s backyard after the family decides that dogs cannot come into their house. Of course, he just teleports directly into Kamala’s bedroom. I’m surprised that she doesn’t realize that he’s Lockjaw from the Inhumans. Of course, it’s unclear how much the people of Earth know about the Inhumans. Unlike say Captain America or Captain Marvel.

Kamala’s secret identity and apparently her powers are currently at risk. Nakia is likely to put two-and-two together about the whole attack on the school.

I think my favorite part of this book was Kamala’s mother freaking out on her. I have lots of love for overprotective parents who over explain why they are that way in lots of hyperbole.

Reading Wilson’s Medusa was the first time I’ve felt she’s been shaky with a character. I was hoping for gusto or for some motherly attentions — I adored Medusa in Matt Fraction’s FF — but she felt a little cold and a little flat. Almost like Medusa was avoiding making a connection with Kamala, even though she said Kamala was precious to them.

And if Kamala is an InHuman, doesn’t that make her parents unexposed InHumans too? Or at least have genetic potential?

Lockjaw just pretty much does whatever he wants at the moment. Loved Kamala calling to him for extra help, and her figuring out how to destroy the extractor. The twist of the teens wanting to be harvested should pan out to be interesting.