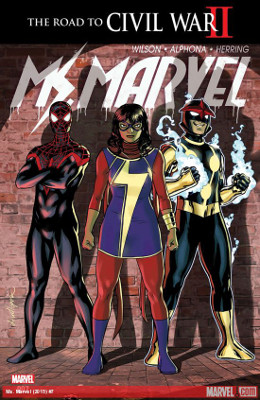 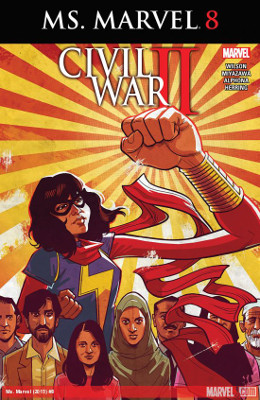 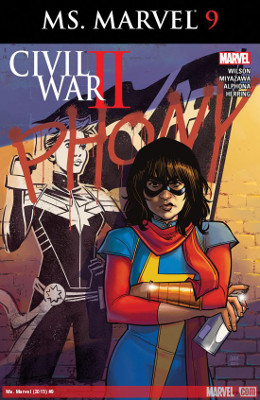 Just lovely to have Alphona back on this issue for a classic high school science fair. Of course, it’s a little less than classic when you have two superheroes competing against each other. (I enjoyed the twist that Kamala knew about Miles, but not the other way around.) And Bruno. Don’t underestimate him.

The shark was cute and funny. I loved how happy Alphona drew the shark as.

Wilson did a great job at showing how Kamala was wrong by using her powers to spy on the other team by having Miles’ spider-senses notice her.

I enjoyed how the entire science fair got out of control. And literally blew up in Bruno’s face. Which made it a good thing that Kamala and Miles were both there. Kamala’s inner dialog was self-reflective about their lives in a nice contrast to the competitive sciencing that was happening earlier.

I’m a well-known grump when it comes to event crossovers. However, Wilson does a good job at making Civil War II‘s central conflict — should people be arrested for crimes they haven’t committed, but a precognitive has determined they will — a personal story for Kamala and her family. Though also, Marvel writers and editors who came up with this idea, I have seen Minority Report, its sequels, and the TV show.

It does make sense to have Kamala at the middle of this battle since she is an Inhuman. And she’s probably one of the more popular ones who’s not directly tied to the royal family or on TV.

No one wants their school to be vaporized, but Josh has to do it by accident in the future. Also couldn’t you just lock these people up for a time period, and when the time they’d do this is over, let them go? Also seems like a lot of visions for one guy.

Wilson is good at making this book personal. That’s always what has made Ms. Marvel strong. Wilson takes Kamala’s point-of-view and shows it through her heroism and friends and family.

Here she tells the story of Kamala’s family and their moves from India to Pakistan and then Pakistan to America. I love how Kamala wears her family’s bracelets as part of her costume.

The part about fascism is that it can sound great — preventing crime before it happens sounds great — until it inflicts itself on your personal life. Wilson knows how to make the story personal. Kamala’s friends are impacted greatly by this storyline. The would-be dead are those she goes to school with. The would-be attacker is Josh, a boy she knows, but isn’t too close to, one who’s brokenhearted by Zoe. (The reveal that Zoe is queer, and that she’s in love with Nakia! Bless.) And then when Bruno tries to break Josh out of jail (along with probably everyone else), he gets seriously hurt.

So many consequences for Kamala. And so many of them that have nothing to do with superheroes or Marvel “events.” Except with Carol’s continued instructions to follow Ulysses’ visions.