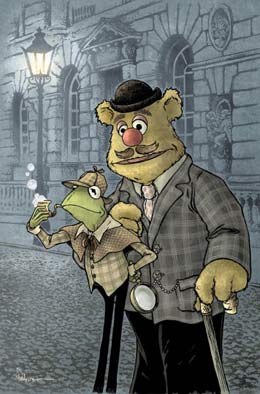 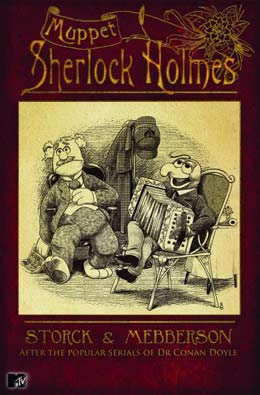 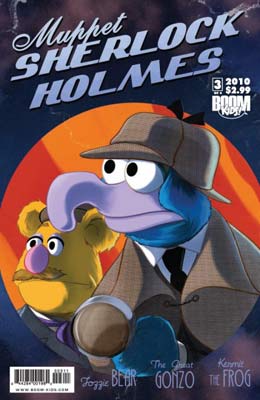 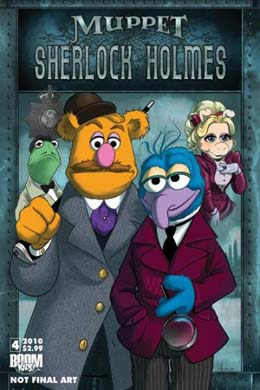 Wow, these Muppet comics may be written for children and stocked in the children’s section of my local comic book shop, but the witty dialog with its constant pop culture references makes them incredibly enoyable for an older audience. References to House, MD, Star Trek, Star Wars, and Batman.

I’m not a huge Fozzie the Bear fan, but he does make a pretty good Watson. However, Gonzo the Great is a wonderful Sherlock and Kermit as Inspector Lestrade works brilliantly as well.

I love the over-the-top poisoning of Julia from the snake. It’s very Sherlock. And how everyone assembles as Sherlock’s deduces just who’s behind the poisoning. Everything’s exaggerated, and there are scenes where you think the characters are going to be harmed but aren’t. Plus, the side appearances by Moriarty. I love it.

This issue was fantastic. Of course, I’m pretty much going to love almost any comic book with a cat in it. Particularly one named Schrodinger who gets put into a bee costume to masquerade as an Amazon Killer Beetle. Lolz.

Anyway, Gonzo, Fozzie, and Kermit are really endearing in their roles. And I loved Miss Piggy as Irene Adler. She makes a great addition to the very male-centric world of Sherlock Holmes.

The whole stakeout was too hilarious. With Kermit in the police box that’s bigger on the inside. And Fozzie’s fake mustache attached to the outside of the postal box. Just lots of wacky fun and crazy times.

This comic is really just a ball of fun. And I love Gonzo realizing how much he’s in love with Irene, but that she hates him. It’s so awesome to see the trope of the woman losing her head and often her agency in the story due to romance being put on the male character. Plus, Irene besting them — but without thinking about all those dirty socks — was really cute too.

The plot was just a little lackluster and a little more convoluted than other plots could’ve been. While I’m sure Gonzo (Sherlock) figured out about the hole in the ground leading to the bank about the time I did, the plot felt like it dragged.

I am glad to see that Miss Piggy (Irene) was bossing them around to clean up their own filthy mess. You go, girl.

I also felt like this issue was in many ways about how comic book writers and artists don’t have to work in offices, and how offices are boring, but easy money. Thanks. I just don’t really want Dilbert out of my Muppets.

I loved this issue, and it made me so mad that for some reason Boom Studio’s has canceled the titles. (Despite that they apparently had writers and artists create a ton of more material.)

Gonzo really does make the perfect Sherlock, and he soars off the page here. I love the carefree way he solves the mystery. The ridiculous way he jumps over all those landmines to find the secret treasure. How he goes where he’s not wanted, and at the end of the day, he somewhat solves the mystery at hand.

Sam the Eagle is rather the perfect victim. He’s so straight forward, which is the perfect contrast to the stream-of-conscious and spur-of-the-moment nature of Sherlock. Plus, there’s nothing like a rich blowhard to hire Sherlock.

I didn’t think I would like such a quick end, especially in the capture of Moriarty (Uncle Deadly) and Irene. (Though I appreciated how the book stayed true to the Muppets and still had Kermit and Miss Piggy want each other, despite being on opposite sides of the law.) But the scene at the falls was also fun. Oh, Muppets, I miss you already.