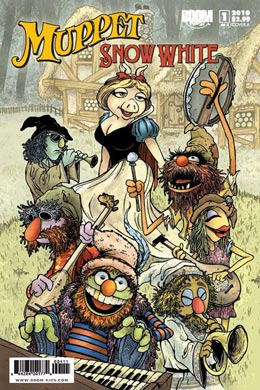 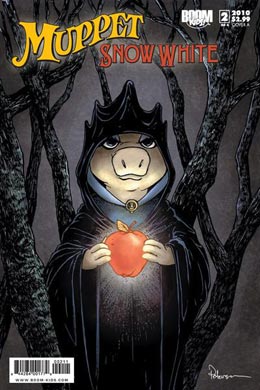 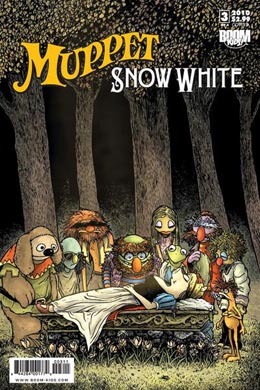 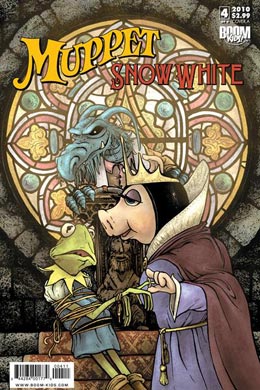 I’m really enjoying this title. I wasn’t entire sold on the relaunch of the Muppets‘ franchise. But these writers and artists are doing a great job at being true to the characters.

I love the set-up that they’re making a Snow White movie. As always the Muppets are cast perfectly into the character roles.

Miss Piggy is perfect as the evil Queen. I love her yelling at Fozzie Bear, who plays the mirror. “Mirror, mirror, on the wall, isn’t moi the fairest of them all?” I love that she threatens to karate chop him. Also that when she sent Sweetums (the Huntsman) after Spamela Hamderson (Snow White), she doesn’t mean literally rip her heart out. Piggy just wants to be the fairest in the 5 mile radius around the castle.

I also loved Gonzo the Great and Rizzo the Rat as the overly enthusiastic Grimm Brothers. They do such a wonderful job at sparring and setting the stage for the story. The rewrites work so well. One thing I adore about the Muppets is that while it’s written for children, there’s still humor just in there for us adults.

The best part by far was the clear remix of “Heigh-Ho” done to the tune of the Ramones’ “Blitzkreg Bop” by the Electric Mayhem (the Seven Dwarfs). It was so clever. In a way that I hope children ask their parents about the song.

Gonzo and Rizzo running around this comic in the 5-miles around the kingdom to keep up with the narrative was a nice gag. Though a gag, I’m glad that the writers had to the foresight to keep only to this comic. There’s public transportation!

Then there’s the auditions for the seventh dwarf to join the Electric Mayhem as Scooter (Dopey) leaves. It was a lot of fun and a great way for the Muppets to add to the plot without overriding it. Plus, Statler and Waldorf get to be judges of the talent. If they want to spice up American Idol, they should hire the Muppets.

I love Uncle Deadly killed Spamela by tightening her corset up. Awesome commentary on the ridiculousness of princess’ outfits without being too anvilish.

Miss Piggy’s rejoicing over being the most beautiful women in a 5-mile radius was awesome. And another great commentary of the ridiculousness of beauty standards, particularly playing on the Miss America pageant this time. And I loved the Swedish Chef wanting to make a poisonous pineapple. Very cute.

Muppet Snow White continues to be fun. However, this issue lacked something. Perhaps, it was just that we all know this part of the tale had to end with Snow White eating the poisonous apple and falling “dead.”

The Electric Mayhem put on their show, and there’s much-to-do when Gonzo and Rizzo can’t seen to get in the club to see them. Well, until Gonzo breaks the fourth wall and asks if “The Readers” are on the entrance list.

Spamela has figured out that Crazy Harry is going to blow up the concert. Her mission is to warn everyone. But when the Electric Mayhem see her, they start to sing a tribute song and Crazy Harry does indeed blow them up. However, not well enough, as this is the Muppets and no one is going to die. That would just be not family-friendly.

Spamela eagerly moves the plot along when Miss Piggy shows up at her doorstep with the poisoned apple. Mostly because she knows Kermit, her prince will arrive sooner. However, Miss Piggy will have none of this. She doesn’t care about being the most beautiful one anymore, just that Spamela doesn’t steal Kermit from her.

The ladies scuffle, but Spamela ends up with the apple in her mouth. Thus, dying.

The best part of this tale is the ending. When Kermit shows up to claim Snow White and kiss her, Miss Piggy swoops down on a dragon and steals him away.

The ending to Muppet Snow White was a bit chaotic. While completely in the spirit of the Muppet Show, hanging a lampshade on all the explosions and throwing penguins, just didn’t work for me. I wanted something more satisfying. Something more true to a clever re-telling.

Miss Piggy’s conversation with a tied-up Kermit and Fozzie in the mirror was by far the most entertaining part of issue #4. Miss Piggy was very over-the-top and perhaps the best characterized out of all the Muppets. I loved her dragging Kermit to the alter, and Kermit not really protesting because it’s Piggy. Also liked her both divorcing her first husband and wanting to make sure she was married to an attractive guy, even if she was going to ditch him for Kermit.

The other part I really enjoyed was Rizzo and Pepe making money off people kissing Snow White. That was pretty awesome.

But like I mentioned in my intro, the chaotic and slash-dash ending just seemed silly. Explosions don’t work the same way in comics — especially funny explosions — as they do on TV.