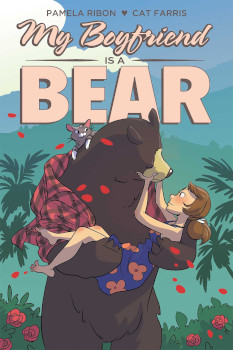 My Boyfriend is a Bear by Pamela Ribon, Cat Ferris, and Saida Temofonte
Rating: 5/5 stars

But also — SPOILER — Nora dates a Bear, who’s name is Bear. He’s just a bear. There’s no secret or extended metaphor here. You don’t find out it’s a perception or imagination. Bear isn’t somehow a magical creature; this isn’t a Disney movie. He’s just a black bear from California.

And yes, there are some weird parts about sex, where she says they don’t sleep in the same bed to avoid temptation, but then they sleep in the same bed and Nora mentions sex in passing later on. But the story doesn’t show anything but kissing and cuddling. There are some touching moments where Bear, Nora, and her cat Nutso are all nestled together.

Ferris’ art is adorable. It helps keep the tone from crossing over the bestiality no one wants to think about it. I particularly enjoyed the relationship between Bear and Nutso, and the parts where you can see how much Bear does care for Nora. Like when he puts up the cat perches so Nutso can escape to his own space and Bear will (accidentally) step on him less.

I did want a little more about the climate change fire that brought Bear to Nora’s backyard. Of course, he clutched her magazines that she buried due to Ben, who’s the worst. I have to say I was a bit surprised when Bear does go back to his bear family for hibernation, and they’re all still there.

This book made me laugh, and it made me cry. I was surprised to feel so much in a book about a woman who dates a bear. Warning: Nutso does die, and I sobbed and then hugged my cats. In fact, I teared up when I looked back at the pages for this review.

It felt real for Nora’s two friends to have opposite reactions to meeting Bear, and a needed balance for Debra to be like, “but he’s a bear!” It was useful for reader identification that Carly went along, and Debra questioned.

The sports watching scenes with Carly and Bear were perfect, in that it showed the kinds of imperfections in real relationships. It isn’t wrong that your boyfriend drinks a little too much once in a while; it’s only wrong if he drinks all the time.

It was surreal and funny when Bear gets a job, and Nora discovers the reason Bear cannot read is because he needs glasses.

When Bear gets grouchy due to hibernation needs, their separation felt like a long-distance relationship when you don’t know when you are going to see each other again. (Though I don’t know how Bear will keep his employment, and I hope Nora hadn’t gotten too used to a two-income household.) Ben playing on her insecurities was awful, but his douchey behavior lined up with sadly too typical attitudes of young men. I’m glad she told him off.

Even if I thought Nora gave into her jealously, it was sweet to see her check on Bear during his hibernation, and to see her realization that perhaps Bear would stay with his kind.

But then — when Bear comes back and brings a kitten with him, yeah, my heart was happy.