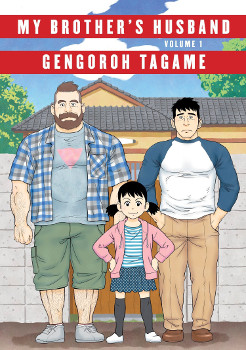 My Brother’s Husband Vol 1 by Gengoroh Tagame
Rating: 4/5 stars
#52Challenge prompt: a book set in a country you want to visit

Sometimes, you need some sweetness. Sometimes, against the harshness of the world, a small story about love and family fits a particular thirst.

My Brother’s Husband is about a single father Yaichi and his young daughter Kana. When Yaichi’s twin brother Ryoji dies, Ryoji’s husband Mike comes to visit and meet his in-laws for the first time. Tagame plays with the dueling attitudes toward queer people from Yaichi and Kana to, in many ways, give a kind of “so you have a loved one whose gay” lesson. Kana is a child, who’s ecstatic to have an uncle and gets to innocently ask all the questions, and Yaichi harbors homophobic stereotypes — which he keeps quiet, but sometimes they slip in his behaviors — and guilt over being estranged from his brother. Love of Kana very much draws the two men together to become true brother-in-laws.

The art itself is very fun. It’s crisp. Tagame focuses a lot of everyone’s expressions. Which makes a lot of sense given that it’s a comic book about feelings more than anything else.

He does insert some scenes where Yaichi sees himself reacting in a homophobic manner, but then chooses to do something else. When these first started happening, it was unclear that it was all in Yaichi’s head. In the narrative, it makes sense, but the art didn’t help make sense of it enough, and I had to read the first one several times to understand what was happening.

Kana is a delightful character. Tagame does a great job at writing a small child. Particularly her openness, her need for love, and her loneliness. And he balances it without making her a “good” child all the time.

The language and cultural differences between Japan and Canada were excellent. Tagame chooses them wisely. It’s not Japan 101 — which makes sense since it was written originally for a Japanese audience — and because Mike would’ve learned a thing or two about Japanese culture both due to his admitted obsession and being married to Ryoji. And it’s not Canadian 101.

I adored the bit with Kazuya, and how Mike was able to help him. I recall being a queer kid myself, and being fascinated to meet queer adults who were living their lives. Role models and people you can trust to have a good reaction when you come out for the first times are so important.

There’s a characterization twist near the end with Yaichi, and I hope in the next volume we’ll see more of it. I thought it was both interesting and surprising. I’d made the same assumption as Mike.

I do also hope we’ll learn more about Ryoji in future volumes. Especially as Yaichi and Mike become actual friends and consider each other family.

Note: This just won an Eisner at San Diego Comic Con 2018. Well deserved, and I cannot wait to read the next volume, which my local comic book store has said they have on order.