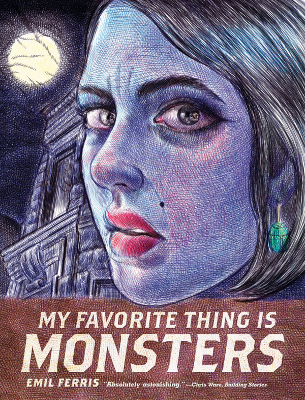 My Favorite Thing Is Monsters by Emil Ferris

My Favorite Thing Is Monsters is a unique and beautiful book. The art is so detailed. The crosshatching so perfect in displaying emotion. The sparse use of color adds so much atmosphere. The school notebook background used to “draw” the scenes (drawn by our protagonist Karen) is incredibly clever.

Additionally, Ferris went through a great personal trauma and illness as she wrote and drew this book. It is incredible to have “learned to draw again by duct-taping a quill pen to her hand.” And then the first printing of this book was “lost at sea” when its shipping company went under and creditors held the books as part of the collateral.

So why the four stars on an amazing book? At times, the art lost the story and vice versa. At times, the plot meandered. It’s centered on a murder mystery, and it’s well-documented that I enjoy books that don’t immediately give it all away. (This is something I love about both Monstress and Pretty Deadly.) However, I found myself rereading pages because I read text out of order far too often. This is always a risk when an artist gets creative.

I also found the first part of the book slow moving. By the time I got to the second half, I couldn’t put it down. I have pretty high hopes for the next volume.

One thing I greatly loved about the entire story was how Karen saw herself as a werewolf. The beginning starts off with her in a panicked, fever dream about being attacked by villagers, when she’s actually just a nice, misunderstood werewolf.

As we continue through the book, Karen’s werewolf features stand in for how she’s othered by society for being a poor Latina queer child. Her werewolfishness serves to show how she’s different, but it also endears others to her via these differences. And many of the people who embrace her weirdness, except for her mother, are portrayed as monsters themselves. In fact, many villainous characters in this book are portrayed as normal looking humans.

There is one panel where Deeze, Karen’s brother, forces her to look at her real reflection in the mirror. There we see a normal girl. It’s also in this moment that Karen comes out to her brother. That she shows him a part of her true self that he doesn’t know. It’s moving and important.

Karen’s childhood crush and kissing of Missy warmed my heart. Especially how Missy saw herself and her otherness as a vampire. A vampire and a werewolf in love. It was heartbreaking for everyone when Missy rejects Karen to fit in with the other girls and to gain her mother’s approval. Missy’s half-apology felt very real for tweens on the brink of teenagedom. I hope we see more of this relationship in volume two.

Same with Karen’s friendship with Franklin, who she sees as a Frankenstien. Franklin is a gay black boy, whose face is scarred. I loved their friendship, and how he’s both tolerant of Karen (and Sally, ghost girl) but also calls her out on her shit. I appreciated that Franklin saved Karen from the boys who would’ve raped her. I adore that he loved her gorey Valentine’s Day cards.

Speaking of Sally, I do think Sally may have once been a real classmate of Karen’s. When they showed Sally’s home life, it was easy to see how the girl could’ve starved to death and Karen couldn’t process another person in her life leaving or dying.

I’m not sure what to think of Deeze. On the one hand, his teaching Karen about the master artists and taking care of her speaks to his character. On the other hand, he may or may not also be dealing drugs or a prostitute himself. He also far too often lets Karen walk in on him having sex with these various women. I haven’t figured out whether or not I think Deeze’s elaborate tattoos are real or Karen’s version of making him a monster with his history. Since we find out at the end that Deeze somehow killed Victor (Karen’s other brother who she doesn’t really recall), I hope if those tattoos are fictional that Victor is added to the canvas. Or something symbolizing him.

Sadly, I figured Karen’s mother would die the moment they said she had cancer. Breast cancer is still extremely deadly, and in the 60s, it was a death sentence. But in a way, Karen’s mom was the one keeping Karen in the dark, keeping her innocent from everything going on around them. I’m not sure if Karen would figure out everyone’s very adult secrets with her mother around. The way Ferris’ draws and describes the mother’s death is beautiful, haunting, and so true. It reminded me of my own experience being at my grandfather’s bedside when he passed.

I did love the rabbit Raymond as a comfort animal for the mother.

Okay, let’s talk about who killed Anka. I still don’t know. I don’t think it was her husband; he was too upset, and if guilty, he probably wouldn’t have let Karen listen to those tapes or be tolerant of her investigating Anka’s death. I never thought it was Deeze, even if he did try to let his guilt over his brother’s death bleed into Anka’s. Perhaps it’s Schultz. Though I’m not convinced Schultz would still be alive, considering he seemed pretty old when he “rescued” Anka.

Anka’s entire life was like one gut punch after another. I got incredibly absorbed into the story the moment the tapes started rolling with her tale. For the amount of violence, especially sexual violence and abuse in Anka’s history, I thought Ferris did a great job at portraying just enough and being respectful. Though it was one time where I felt it was no longer “Karen” drawing the story as I’m not sure she knows about child prostitution or sadomasochism.

You just want Anka to run away from it all, and in her own way, she does. My heart was pretty much ripped out when Sonja dies. Especially the part about the garden. The costume that Anka wears when she kills her mother was brilliant. It is incredible to see a child sold into sexual slavery in Germany just 100 years ago and have all the adults (minus Sonja) act as if it’s not a big deal.

It gets icky. Even Anka’s escape is to Schultz, one of the Johns who only likes young girls. It’s so saddening to see Anka become a successful young woman despite everything, and then to be yanked away by the Nazis and put into a concentration camp. Ferris here again shows just enough. And then Anka makes the ultimate bargain with Schultz to save her, to start her own child prostitution ring with girls she’s “rescuing” from the concentration camp.

While we haven’t seen yet what happens to Anka from here to when she “kills herself” in the 60s, for someone who bargained and basically sold her soul and the innocence of others to save herself and them from certain death, she just doesn’t seem like the killing type. Instead, Anka is a survivalist at all costs. Makes me agree with Karen that she was murdered.

And if Anka did start a “pharmacy” as the characters call it, there are plenty of forces who may have wanted Anka dead.

There is so much packed into My Favorite Thing is Monsters, which is both its strength and its weakness. I have high hopes for the next volume. I’m definitely invested in the mystery and this story.

One of my wishes for this book (which the second volume comes out in October and it’s been optioned for film/TV) is that Fantagraphics would put it out in a more accessible format. The oversized paperback is a joy to read. The paper is thick. The book’s spine stayed together as I read it.

However, the $40 price tag keeps readers away. Fantagraphics likes to position itself in the market as being incredibly indie and bringing unique voices to the table, but when new readers cannot afford these books, how are these stories reaching audiences? Given the price tag, I was surprised that five ladies showed up to discuss the book for my ladies book club. I know not every club member can afford a $40 graphic novel.

I am looking forward to solving the mystery in volume two.