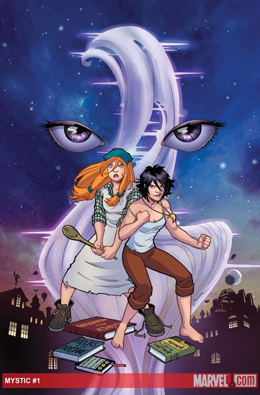 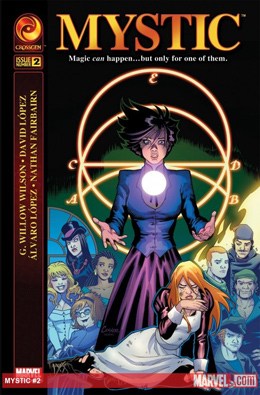 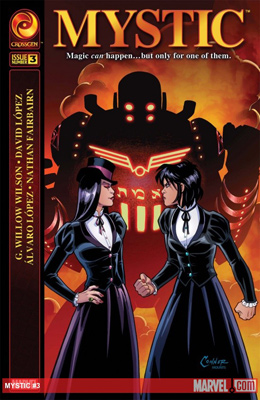 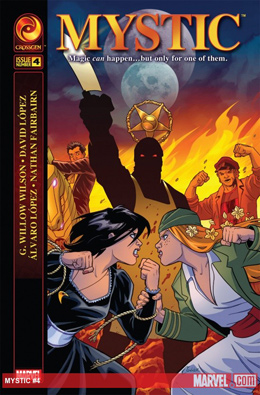 I really loved the introduction to Giselle’s and Genevieve’s world. Both Wilson and Lopez did just the right amount of character introductions and world-building through showing, not telling, that this introduction was both interesting and made a coherent tale. (All those creators who’ve been relaunching titles, take note. This is how you do it.) Everything from how the characters dress to how they sneak into their Mistress Alenora’s library to gain knowledge tells a lot about who they are. And the mystical, but robotic dog set the tone perfectly for the world these girls inhabit.

And I loved their friendship and how they compliment each other. And even with what happens, I think both of them will be going on this journey. Though, of course, it would be Giselle who spoke up during the Noble Arts exam and took an instance place as an apprentice. I can’t wait to read the next issue.

I’m really glad that Giselle has already struck up a friendship with Ondine. I was worried a bit that Felice and the other two girls were just going to be mean to her the whole time, and that would be sad given the friendship of Giselle and Genevieve was broken up.

The contrast and comparison of Giselle becoming a “lady” apprentice and Genevieve becoming the apprentice for the revolution was well done. Though I do have to say that I wanted to learn more about Genevieve’s world. Sure, we got a taste of the lower class in the first issue, but I’m interested to see how the revolutionaries have organized themselves and their vision for a more equal society.

Master Alexander’s revelations about the aether was certainly interesting. Somehow I think Giselle and Genevieve will be reuniting to solve this one.

Of course Felice continues to be a jerk. The whole destroying Giselle’s clothing and causing havok with the robots they built didn’t surprise me in the least.

Wilson did a great job at writing Giselle both being encouraged and scolded by Master Alexander. When he was being harsh, I found myself siding with Giselle, and then I realized that Wilson’s writing had sucked me in, in a good way.

I’m not surprised that Giselle ran off. Not only did Giselle and Genevieve need to meet up again before the final issue, but she’s just too independent to keep with upper-crust society rules. Mystic is really shaping up to be a fun miniseries.

I was so hoping that Giselle and Genevieve would make up by the end of this miniseries. But things just got a little worse! Though there was a couple moments of hope, and oh, I hope that Wilson gets to write more in this universe.

Gerard coming to save Giselle from beheading was extremely ridiculous. And Wilson made that possible damsel-in-distress scene turn on its heels when Gerard couldn’t actually drive the aether-powered machine horse, but Giselle could.

I did really enjoy that all the students came together in the end to work to collect the aether based on Giselle’s plans. It was nice to see that despite all their differences and jerky attitudes that they realized when it was time to buckle down and save their civilization.

Phillipe was a sleezoid, and I’m glad that Genevieve is now fully in charge of the rebels. Not just their speaking voice and aether expert. Yay for women having important and real roles in revolutions.

I can’t wait to what other stories Wilson has to tell about this world.