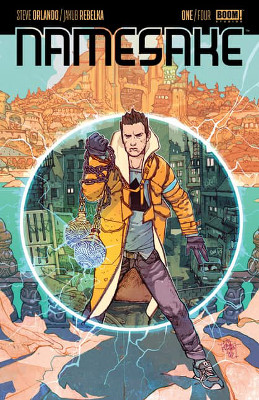 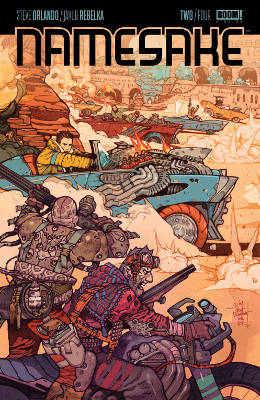 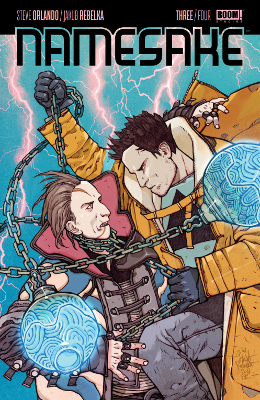 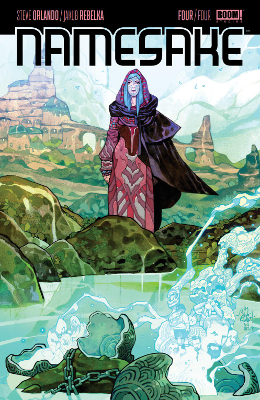 This is a super interesting world that Orlando and Rebelka are building. There was a lot about it that you just had to jump into, which I’m okay with a book not holding your hand, but it took me about a third of the issue to feel like I wasn’t confused.

Though I’m still not sure I understand anything around this Ferrier fellow.

Jordan Molossus is an odd character. He has a lot of issues, and I’m not saying firefighters are all heroes, but he’s a little quick to temper and seems more like a loner. Maybe we’re only seeing him in extra stressful situations. I mean, I wouldn’t be in too great a mood if I was randomly attacked by strangers and then got a box from my supposedly dead fathers, finding out they weren’t really dead until now.

The world of Ektae looks quite lovely. I’m excited to explore more of that. And I assume Jordan’s going to get out of his situation with these guards by swinging around those iron urns.

Every time I think I know a little more about what’s going on this comic book, Orlando does something that makes me think I know way less about Ektae. Besides magic, there are definitely differences between it and Earth.

These followers of Ferrier seem to be in some kind of Mad Max style situation. Will Jordan being their Furiosa? Or is this what happens when no one will be Furiosa?

So I take it that one of Jordan’s dads is still alive. I can’t tell if that’s some kind of magic message or if in the next book, we’re going to see him become corporal from that mist. (I take it that Jordan was mostly raised by Morgan?)

So Jordan’s going after C. Jdorn, his other father, who’s the reason Morgan’s dead. And is apparently a big crime lord. I’m not sure that I enjoy this bit.

I did like learning the story of how Morgan and Jdorn met. Unfortunately, their relationship started out with a lie. It’s not surprising to see it all fall apart. But it was nice to see the initial love that Jordan was born into.

I suppose the next issue will show if this plot can be wrapped. Will wrap up be Jordan forgiving or killing his father? Will Jordan’s intimacy issues be resolved?

I did really love the ending of this and what it says about chosen family. Jordan ends up staying in Ektae — at least on the shores and for the next seven years — with his surrogate mother and Sid. Sid who came through the last portal to find Jordan. Sid who made Jordan make a decision unlike either of his fathers.

I did wonder if Jordan was actually going to kill C. Jdorn. I was surprised when he broke his back. But not when the other bad guy delivered the killing shot. Talk about severe dad issues.

Good thing that Jordan came armed with those iron obs. They certainly were the ones to save him.

I hope Orlando will get to play more in this world.