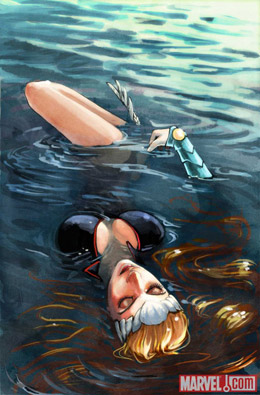 I love Namora and Agents of Atlas, so I’m really happy she got a one-shot. However, I’m being disappointed as the men in the group are getting miniseries, and all Namora gets is a one shot. (And Venus hasn’t gotten anything!) The women need a lot of love and care too.

One thing I really appreciate about Namora is her lack of conflict between her human life and her Atlantean life. She doesn’t brood about it. Namora just does it.

Here Namora saves some men trapped in a submarine. With the help of a whale. (Just another reason why whaling is bad. Sometimes, they help save human butts.) When Namora knows the men are safe, then she goes after the rumor about a colony of her people.

There’s clearly something going on when the colony refuses to move to the new Atlantean home-colony. And then when Namora finds out that anytime they stray from the colony, they become weak and almost die. The Atlanteans claim a vent gives them a special life force and has healed them. When Namora stands over it, the scene reminded me a lot of the Doctor Who episode “Fires of Pompeii” where the young girl gets visions from an evil lava creature underground.

So yeah, this issue was a tad predictable. Of course, the monster would go after Namora’s weakness: her daughter. And, there was never any doubt in my mind that Namora wasn’t going to see through the monster’s spell. She’s just too practical. Plus, I figured there would be some reason for the Atlanteans to move to Namor’s colony.

Overall, this issue was really well done and it makes me long for an entire series about Namora.