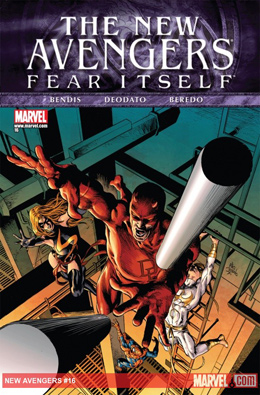 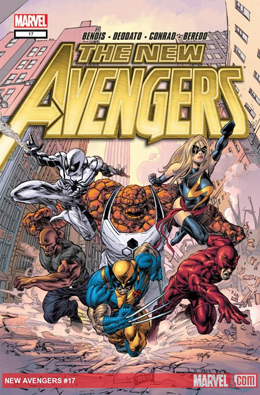 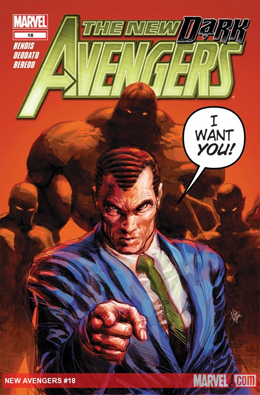 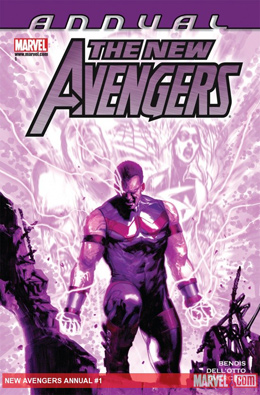 This issue felt odd. It felt like there was this giant character issue during a crossover. Weird.

I did like the telling of the small story. The story of how Daredevil rescued Squirrel Girl and Danielle to put them in the safe house below the Avengers mansion. Small stories are Bendis’ strength. But I think he was trying to do too many things: make a Fear Itself crossover, tell a small story, put Daredevil in the Avengers, and do some more interview-style comics.

Didn’t we just have this storyline? No seriously, didn’t Norman Osborn just try to rise up and destroy the Avengers? Were sales of Dark Avengers that fantastic that Marvel is dying to revive it? Or does Bendis just not want to let go? I don’t get it.

Sure there as a twist that they couldn’t hit it or it would send back the kinetic energy. But it’s not like it took anyone anytime to figure that out since Tony had before they got there. Mostly, this felt like an excuse to make Tony look stupid and have lots of quip time with Spider-Man and Wolverine.

Wake me up when this is over.

I’m done. It’s over. I did not buy this title as a vehicle for Bendis to start other stories in it. I bought it so I could watch the Newer More Diverse New Avengers kick some butt and have family-time.

Sorry, Bendis, but if I want to read an Osborn tale, you’ve never done it for me. You’ll never make as sick and sinister an Osborn as Kelly Sue DeConnick wrote. Having Osborn recreate the Dark Avengers and then hanging a lampshade on it is not cute or cleaver. It’s boring. I think the line-ups a little better done this time around, but then again, it’s just another time around.

If I hear good things from the ladies-read-comics blogs I follow, maybe I’ll pick this up in trade. But I’m done right now. I don’t want you.

I was really expecting more from this comic book. And I didn’t expect it to be a set-up for other comic books. I get that it’s a large “Avengers” plotline; however, I’m not so keen on the idea that because I’m picking up one Avengers title that I’m going to be buying all of them.

Additionally, for a $5 annual, there wasn’t a lot of text or pages in this. The length seemed to be that of a normal book. Why am I getting charged more?

Dell’Otto’s art was unimpressive, and there were too many pages with Victoria’s boobs visible and in front.

On another note, I was further disappointed by Simon’s dejected Avengers being filled with men. (At least, they’re not all white dudes.) And with how cool the Avengers are supposed to be, they got their butts kicked pretty quickly.