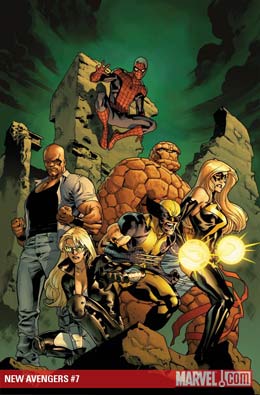 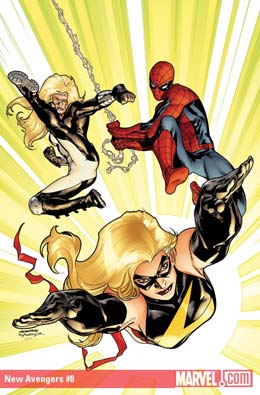 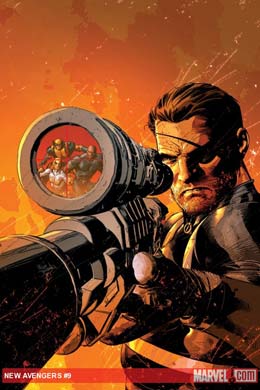 Okay, now this is the type of Avengers’ comic book that I want Bendis to write. This is the type of story that I like to read about the Avengers. For some reason, as a team, I’d rather see them doing their laundry and interviewing babysitters than fighting evil. I don’t know, either. Maybe those type of stories are more suited to Bendis’ wit.

But I will say this: Bendis, you need to get over your hatred of She-Hulk. Full stop. Don’t put her ever again in a line-up of B- and C-characters. End of rant.

I’m not super thrilled about Doctor Strange sticking around and being on the team. But I did think that the team deciding that he was going to stay was perfect. They were right; all of them have dangerous people who want to kill them. What makes Doctor Strange’s enemies any worse? Also Wong! I’m so glad he’s there and snarking.

I adored Jessica calling out Luke on his “I don’t want to be paid. I’m too proud.” bullshit. Because once again, Jessica is awesome, and she remembers how he was on Heroes for Hire, the keyword being hire. Not to mention, she had her private detective agency.

And I’m so glad that they hired a babysitter for Danielle. Now I don’t have to worry that Jessica isn’t going to get into the action because someone has to take care of the baby, and Luke’s leading the team, so it’s default going to be Jessica. I’m not a huge Squirrel Girl fan, but I’m not opposed to her as a choice.

I love Victoria getting the last word. Yes, Victoria, they are all indeed crazy.

Okay, this is my very favorite issue of the New New Avengers, and perhaps my favorite thing that Bendis has written in a very long time. I don’t know if I was clear, but I’d kind of rather be reading the Luke and Jessica story featuring some of the Avengers more than anything else. Plus, Acuna’s art fit so well with type of story, which was mostly about a married couple going on a date.

I loved the opening scene where Luke is sitting there in a gold turtleneck and getting hit on by Avengers’ fans. (Do you think Jessica’s ever like, “Luke, can you wear something that is not the color of your uniform and baby puke?”) And how smooth-talking he is as Jessica arrives and he shoos the women admirers away. And their conversation about Jessica becoming a superhero again, and how clearly, he knows she’s going to be, so he spends his time arguing about how she needs to be called, “Power Woman.”

The random Doombot was awesome. Ms Marvel’s line about how she was just flying and it fell on her was brilliant. I mean, I was a little disappointed that Luke and Jessica’s date was ruined, but I get it that Bendis is still working hard to sell Jessica Jones: Power Man’s Wife or The Young & The Superpowered. (Almost all comic books are soap operas, nerds. Especially team books.)

The ending was brilliant. I love the uneasy way that the team accepts that they need Victoria and her information, and how she can only give so much of it — but they don’t really care that much — because Spider-Man won’t unmask. Jessica’s announcement that she was on the team, and her saying she was taking the Power Woman mantle and then immediately taking it back based on Luke’s reaction was brilliant. As was Luke pointing out that Spider-Man was a white dude, even if they can’t see his skin. (Though technically, you can see his skin color when he blinks and around his eyes and mouth in general.) It was still funny.

Ugh. I don’t know what I’m less thrilled about, Deodato’s art or a story about Nick Fury. Where’s my Luke and Jessica story?

So Nick, Dum-Dum, and their black friend go across the world hunting down former Nazis and keep reliving War World II even though it’s the ’50s. I’m wondering what this has to do with the main plot. (Unless we’re getting Nazis as villains as Nazis are the only safe group of people to hate and kill.) Except that I don’t care enough to speculate.

Okay, it’s pretty obvious that Superia, with her super long-long-long legs (thanks, Deodato), is probably some Nazi or genetic manipulator or otherwise evil.

I did enjoy the bit of snarking before the stakeout. Also I loved when Jessica, Luke, and Danny went to steal the semi-trucks. Particularly Danny and his lack of driver’s license: “I never needed one, Jessica. I live in New York or in the magical city of K’un Lun.” Hahaha, that’s so ridiculous sounding.

So not happy with Bobbi getting shot.