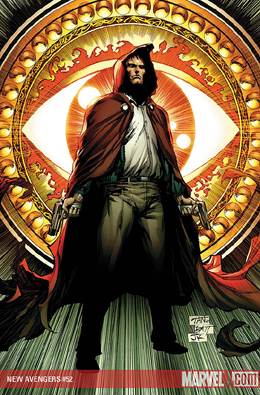 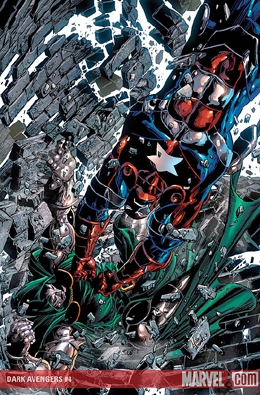 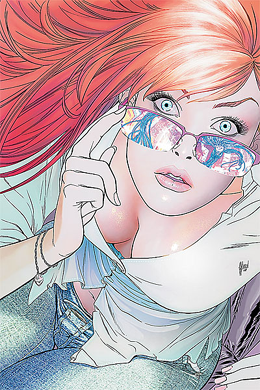 This title is definitely picking up in a direction that I approve of. It’s become interesting, and I’m enjoying the re-focus on the team. Like I mentioned in my review of #51, I’m still enjoying how Bendis writes Dr. Strange and how human, yet Sorcerer Supreme mystic.

I’m still holding out that Billy becomes the next Sorcerer Supreme, and it was a bit of an anvil that Billy saved Dr. Strange from the Hood.

I love that the Red Hood is more complex than the initial “let’s kill Dr. Strange for his eye charm” that the beginning of the story seems to say. Yay, Madame Masque. She’s awesome and I’m hoping for more of her. They’re kind of sweet and insane together.

Also how awesome is it that Ms. Marvel stole a quinjet.

Glad the Morgana Le Fey battle is over with. The only part I really enjoyed of it was Dr. Doom snarking at Norman Osborne and Osborne being like “shit, he’s right.” And then the second “oh shit” moment of Bob showing up alive.

Anyone who ever read Birds of Prey knows that if Barbara Gordon is pushed out of her wheelchair by thugs, they’re going to pay.

I feel like the point of this mini is to clean up some of Morrison’s anti-life mess. And I don’t think that a three issue run is going to be satisfying enough. However, this comic was popular enough that I went to five different comic stores in the greater Seattle area, which all of them had underordered and out-of-stock. (Hello, DC, there’s your female audience.) I finally got it on a re-order.

Overall, it’s been an okay comic with awful covers of Gordon’s shiny breasts. I feel like the character of Jin being called out on his misogynistic attitudes is to both hang a lampshade on the misogyny present in comics, while still giving fanboys the “nude, wink” that yes, even the women in a wheelchair is a hottie.

0 Replies to “Newish Comics: Two Bendis and an Oracle”