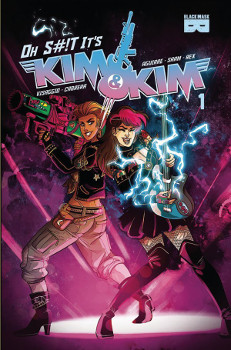 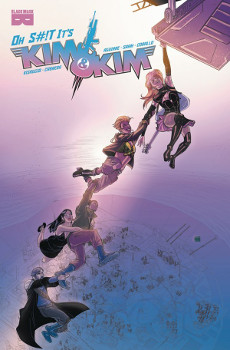 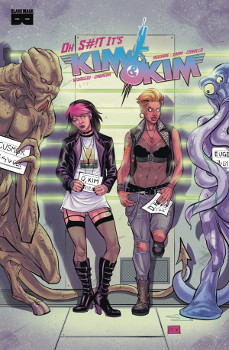 I’m not quite sure what I think of a six-year time jump between the last miniseries and this issue. That’s a lot of changes which have happened. A lot of character growth and relationship changes. A lot of working for Kathleen at her bounty hunter agency.

However, the issue opens with Kathleen reading the Kims the riot act over their unprofessional behavior, destruction unnecessary to the mission, and their low rate of mission completion. So it doesn’t seem like much has changed? Maybe it would’ve been better to set this six months or a year after being hired. Maybe going after Kim Q’s dad’s art will show us what we missed in those six years?

Kim D does seem like she’s tolerating Kim Q’s antics less. She sounds tired of it. Her outfits and her ways appear to have butched up over the years, and I’m super happy with that direction if we’re going there.

They are just fucking straight up playing Dabo in this casino. (Dabo is a casino game from Star Trek: Deep Space Nine.)

Right now, Xue Ping is a bit of a stereotypical cold Asian lady villain. I do hope that we get to know more about her as we go onto heist the recording of Bonnie Tyler. We saw a little bit of it in her love of the song. Right now, she’s pretty weak compared to all the immediately impactful and curious characters we typically get in Kim & Kim.

The card cheating guy and his cybernetic eye getting fizzed out by his and Kim’s fall into the fountain was pretty hilarious.

Of course, Xue figured out the entire scheme long before it happened. And no, Kim Q was never going to talk to her father. Though we really cannot blame her entirely after we spend more time with Furious.

The flashback was painful. So painful. I did love finding out that Kim Q named herself after her mother.

Kim Q does need to deal with Saar, even if she doesn’t want to deal with her father. She cannot just keep dragging Saar around and also avoiding him forever. Saar needs to stop trusting her. My biggest issue with Kim & Kim narratively is that they never seem to grow up and change. They can still be fuck-ups but say Kim Q resolving things with Saar would be some emotional movement forward.

No one is surprised that Xue got the copy of “Total Eclipse of the Heart” and put Kim and Kim in a pickle. Those ladies need to stop talking so loudly.

Kim and Kim are magically transported to Orange Is the New Black. Or at least that’s what I’m getting here, and I don’t think it’s just because I was recently watching it. The art seems directly from the show in the layout of the prison cells. Kim and Kim are pretty lucky that they got to be cellmates.

Of course, we continue to see Kim D actually try to rescue them. She’s breaking into the comms system, or at least trying to. But Kim Q instead is becoming the alpha dog of prison. She’s just beating up everyone and then going to lead a riot.

The bit of background about Kim and Saar during their childhood was a fascinating insight into their relationship. Seems pointed enough that Kim may still be able to count on having Saar as someone on her side. Even if Kim’s dad is going to let her rot.

I did find the contemporary scenes with Furious and his elaborate torture and murder chambers to be excessive. Seems like he could easily have enough resources to find Xue and get his music back. I’m okay with this book being over-the-top, but those Furious scenes rubbed me the wrong way.