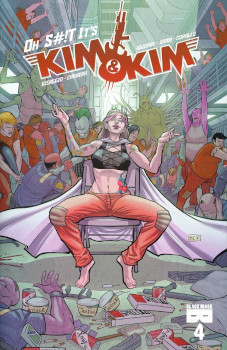 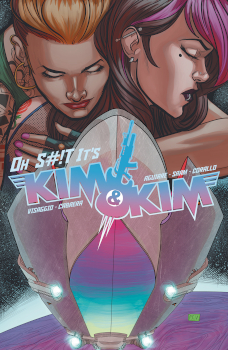 The art in these issue took the story down from four stars to a three stars tale. The art looks rushed to make a deadline. I get that prison doesn’t have a lot of decorations, but I expected a little more texture to the world. The pink color in Kim Q’s hair also keeps changing what side it’s on.

I don’t know what to think of Watta Lachien, the corgi-like creature who secretly works for Kim Q’s dad. Like cute, but a ridiculous gag. I’m not sure if the level of ridiculousness doesn’t pull me out of the story.

No one is surprised that Furious was the type of father who beat up his child to “train” them. Though Furious words about fighting to win compared to being willing to die while fighting does explain Kim Q’s fighting style.

Of course, Saar comes to save Kim and Kim. I hope we get some further revelations and growth in Saar and Kim Q’s relationship given the revelation that they were best friends as kids. I wonder if Visaggio had always had this dynamic planned throughout the book because it gives us more insights into Saar’s motivations — besides general sexual attraction. It was always very believable that Kim was having sex with him to get back at her father, but now there’s more than just dad and I rather like that.

There’s a lot about Kim & Kim to love, but there’s always places it’s weak. I’d love for this to be a truly on-going title, instead of a bunch of miniseries. Yeah, this does end one story, but it leaves so much open. Plus, some of these miniseries have been skipping ahead in time, and here, if we just time jumped, we’d lose some of the emotional resonance.

It fit that El Scorcho is red and has a pterodactyl dinosaur head. Also, that he finds Kim, Kim, and Kathleen to be annoying, in contrast with his outsized effect on their worldview. This power balance is, of course, very realistic to the outsized influence that billionaires and monopolists have on the general public, but we don’t have on them.

Kim D using her magic to get Kathleen out of prison will have consequences. The same way the fights Kim Q jumps into have added up.

Kim Q discovering the reason why the reel was messed up worked well. (Though I thought this was “Total Eclipse of the Heart,” not “Heaven is a Place on Earth.”) Kim’s emotions about her father saving that recording, along with his current anger at Saar was a nice contrast. It’s clear Furious doesn’t want to give his empire to anyone, but Kim, but also he made his own barrier. This time Saar is on the brunt of that rejection.