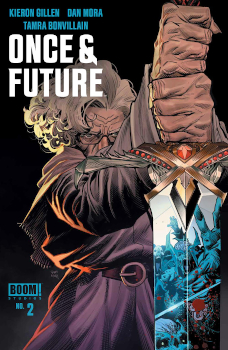 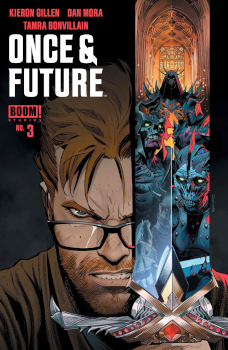 Gillen’s an incredibly talented writer who knows how to pull one into the story automatically. The pacing here is quick, and the story leaves you wanting to know more about what’s going to happen. It’s also very ominous. Plus, the story’s centered on a modern Britain, and “Britain’s darkest hour,” which we all presume is Brexit. Gillen uses this shortcut combined with the Arthur of Camelot legend to put us more immediately in the world. Of course, you do have to agree with Gillen about politics.

Mora’s pencils are expressive. I’m curious to see how they will unfold as our Arthur awakening group were the least distinctive compared with the other characters. I hope we get to see more of Rose, even if she and Duncan definitely had a very bad date.

Duncan is a sweet character, who you can tell tries to do his best in the world. This means Once & Future is going to be his hero’s journey, but also he makes an excellent point-of-view for the reader to connect with in this unfamiliar magical world.

Bridgette is so far my favorite character. Who doesn’t love a sassy grandma who Duncan describes as “weirdly aggressively independent.” This is, frankly, how I wish to be defined. I like that Bridgette insisted on going into an elderly living home as part of her not wanting Duncan to worry about her. Her digging up her hidey-hole and declaring everything just got heavier was delightful. It was also quite fun to see Bridgette shoot Duncan, along with her dialog about Uber and not believing in nonsense.

It will undoubtedly be fun to see where this series goes.

Bridgette telling Duncan that she raised him better than to be sarcastic was brilliant. Mostly in that she’s full of sass in everything she says. I loved it when Bridgette told Duncan that he needs to stop dropping his jaw at everything when they’re in an emergency.

It’s a nice quick connection that Elaine used to work with Bridgette. I like this “she should know better” aspect, and also that Elaine knew her colleagues would be murdered by a risen Arthur.

Galahad seems to be Elaine’s child, or something. She’s anxious about him, and he’s what distracts her during the resurrection ceremony. Perhaps, he’s her dead child as all the others were resurrected from the dead by Arthur.

Bridgette telling us the Ladies of the Lake are undead demons creates another shortcut that Arthur isn’t going to be a good guy. Bridgette seems convinced he’ll bring about the end of the world, or the world as they know it. And she calls out that Duncan’s on a hero’s journey, or as she puts it, pulled into the story and his quest.

Given Arthur’s reaction to the Anglo-Saxons, I imagine we’ll have a bit about immigration in this book.

Duncan just throwing his grandma over his shoulder and sprinting away from the explosion was the best.

I’m glad that Rose will be back.

This book is terribly fun, and I’m having a ball reading it. Gillen ends each issue on a cliffhanger or hook that makes you want to read more, so, of course, this is what I’ve been doing with my evening.

I called that Galahad is Elaine’s son. He’s just a little older than I initially pictured. I cracked up when Bridgette calls out how much his outfit costs. Though I don’t know if Bridgette shooting him will stop Galahad, given that Arthur’s other knights rose from the dead. Of course, Arthur himself licked their blood and then killed them, so perhaps that’s more to the trick than just raising any dead person.

Somehow I don’t think Duncan will let his grandma shoot a person. Those undead knights in the last issue, sure! But a person? Even if they are trying to stop an evil that would undo the world.

Yay for Rose! I love how Bridgette scolds Duncan for treating life like a story he’s sucked into, and he scolds her for “treating Rose like family” by being mean to her. Also, the callout that Rose and Duncan have similar reactions to the supernatural was cute.

It was interesting to hear about Duncan’s childhood, but I don’t know why Bridgette wouldn’t think he’d seek the things she banned him from reading and watching. That’s what kids do.

I’m glad Arthur got some more structure to his body and some clothing. I bet it’s a bit easier on Mora’s pencils.