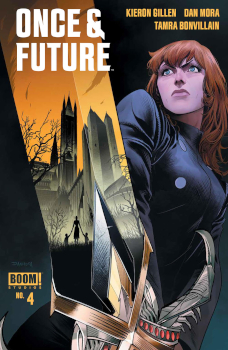 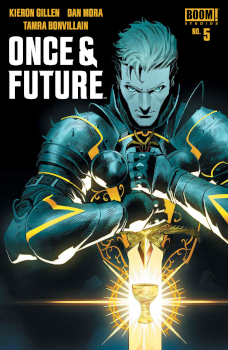 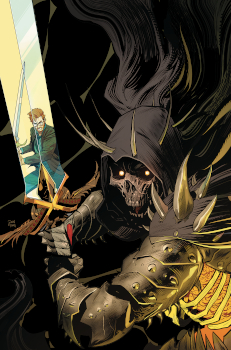 Of course, Duncan wouldn’t let Bridgette shoot Galahad in the head. He’s going to kill monsters, but not people. This was before he figured out that some people were raised to be monsters.

I take it that the Fisher King was Bridgette’s supposedly dead husband. Which means Galahad is likely Duncan’s half-brother, which seems very Arthurian trope. “How’d you know he’d been shot in the crotch?” is an excellent question. I feel like, without Rose, we’d never get anywhere near these answers.

While I’m okay with having to piece some things together, when the action’s moving the plot this quickly, sometimes it’s good to have a tad more exposition than Gillen writes here.

Rose seems a bit more competent at her role than Duncan. I do like when Bridgette compares Rose’s role to M from James Bond, and then she gets excited to find out that current movie M is a woman.

Ah, Bridgette, she pretends not to be pulled into the story, but she created her own Percival. All the other players like to think they’re one step ahead of each other, but they are not. (Also, this could mean Elaine is Duncan’s mother. Though she looks too young to be Galahad’s mother, but would especially be too young to be Duncan’s. But magic *hand wave*.)

This series is more charming when I read a bunch of it together. The narrative sweeps together in better ways, and Gillen is masterful at pacing. Nothing seems rushed or too slowed down, and when you read a bunch in a sitting, it shows more.

Bridgette continues to play Duncan, and I’m not sure how I feel about him knowing so much and then going along with it. Bridgette becomes her own Fisher King when Duncan admits that she was both his mother and his father in how she raised him. Shooting herself in the chest means Bridgette does want to live, even if things seem very grim for her by the end of the issue.

Rose had little to nothing to do besides cradle Bridgette’s bleeding out the body while Duncan went to get the Grail, which it cannot heal anyone when it cannot cross realities.

I did enjoy how all the traps on the other side were pretty obvious traps. Like they’d been there so long that there was already a dead body on the bed covered in arrows.

It surprised no one that Elaine — or Nimu, as she’ll now being called — cannot leave the story. The same way that Duncan tries to reject his grandmother’s training and family legacy at the end of the issue. You know that he will not be able to stop.

Arthur is still alive. Even though his world unravels, he’ll be back and keeping his belt.

I’m thrilled Bridgette is still alive and sassing. Duncan will never be done with her because he won’t reject his only real family, plus Rose now has access to everything. More Rose, please. There wasn’t enough Rose here.

I laughed out loud at the panel where Arthur says, “A frank has lain with my queen!” It was so ridiculous.

Gillen was very smart here to come to some kind of end if he had to put a stop to the series.