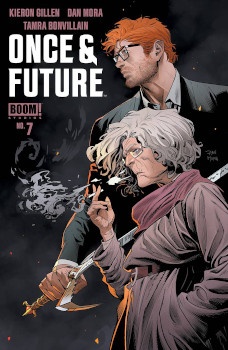 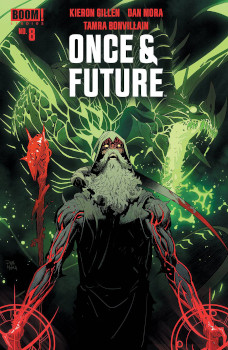 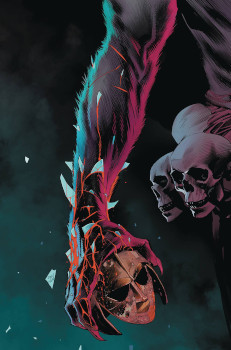 Bonvillain is a glorious colorist. The way she builds out the dead otherworld of King Arthur is brilliant. Same with the forests in England. Her colors give incredible depth to every page. With them, the story feels more alive and tangible. I cannot wait to see what she does as Gillen brings in more myths and legends.

Is this going to turn out to be all of England’s myths and legends? I’m not sure how I feel about that. However, I know Beowulf much better than Arthur.

This book continues to be a romp, but at the same time, I wanted some moments with Duncan and him dealing with everything that’s happened. Maybe he and Rose having a cup of tea or something while hashing out their feelings.

Bridgette calls Galahad her grandson, but Duncan’s stepbrother. Isn’t that supposed to be half-brother?

Bridgette was right that Duncan would’ve hesitated to destroy Galahad, even in his changed form. (Also, what a sucker to sit in that throne of skeletons and not expect something terrible to happen to him.) I do love her when she pulls out her guns.

This story is starting to unravel a bit. The characters are running around, doing their own operations, and believing they’re interacting with each other, but only by very loose means. And we’re introduced to a brand-new character: Merlin.

The art remains perhaps the most robust feature of this book. Mora’s Merlin is creepy. He’s too skinny, but then those sinew arms. Sure all these supernatural characters seem to have some features that make them inhuman and violate the laws of how we believe bodies exist in the world — but Merlin seems like he’d fall over in a mild wind.

Bonvillain’s colors very much lead the book. The use of light and fire conveys so much, and the places Mora gives her to expand the story are nothing short of beautiful.

Duncan and Bridgette keep missing their target. I don’t know why they don’t assume they’re following Elaine. She is the character who got away.

Of course, Beowulf aligns himself with Arthur. That character understands power and monarchy. I hope we see him lost in a modern world, or at least scared of things like cars or other technology.

Galahad is not fine. But telling Elaine that is critical for her not to go against Arthur.

Still not enough Rose. Gillen needs to figure out how to incorporate her more into the story. She deserves full characterization.

Bridgette and her snark also carry the story. I loved her conversation with her fellow elders at the older folks’ home. The way that she’s mellowed is just threatening to break people’s fingers instead of outright kill them. I stan.

Beowulf was suspiciously easy to murder, which Grendel coming alive makes sense. Duncan won’t be getting a lot of sleep. I’m kind of surprised he could fall asleep. I know with myself, I’d be dead tired, but too much awake to sleep.

So Elaine is working with Merlin.